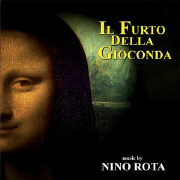 IL FURTO DELLA GIOCONDA (THE THEFT OF THE MONA LISA) is a TV mini-series in three episodes directed in 1978 by Renato Castellani and starring Enzo Cerusico , Paolo Carlini , Philippe Leroy , Gigi Ballista , Elisabetta Carta, Bruno Cirino , Emilio Cigoli, Renzo Palmer, Ettore Manni , Riccardo Garrone . Produced by RAI - RTR and broadcasted from the second channel of RAI TV, from February 1 to February 15 of 1978. At the Louvre in Paris, on the night of August 20, 1911 the famous Mona Lisa by Leonardo Da Vinci was stolen by Vincenzo Peruggia (Leroy), an Italian whitewasher born in Dumenza, above Luino , who emigrated to France in search of fortune. Perugia, while working in the halls of the world's most famous museum, plans to return the precious Mona Lisa back to Italy, so to be able to rebuild his life, perhaps even becoming a celebrity. Taking advantage of the weekly closing day, well hidden, aided by the darkness of night, the young man waited all security personnel to leave, then he managed to remove the painting from the wall, hided it under the wide jacket and sneaked outside. It is said that for two years Vincenzo Perugia kept Leonardo's masterpiece under the kitchen table at home, while the French police hunted down all suspected persons, included the young poet Apollinaire (Mirabella). A Spanish immigrant, with some artistic aspiration, imprisoned for a few days, at the police station recorded his name as Pablo Picasso (Cirino). Then in 1913, under the name of Vincent Leonard, Perugia replied to an advertisement of the antique Florentine Alfredo Geri that he wanted to organize an art exhibition on the banks of the river Arno: Meet me, I have a canvas to show to you. Geri became suspicious and went to the rendezvous set in a hotel, together with the director of a Florence Gallery, Giovanni Poggi. The two found themselves in front of the famous smile of Mona Lisa, the most wanted smile by all the police of Europe. To the surprise of his interlocutors Perugia justified himself by saying that he had stolen the painting to return it to his country, to repair the Napoleonic pillages. Not knowing that the Mona Lisa has always been rightfully French, sold for four thousand ducats to Francis I by Leonardo himself. Perugia ended up in jail and so the Mona Lisa, after being exhibited for a few days in the Uffizi and then in Rome and Milan, went back the royal halls of the Louvre where it is still preserved.
Nino Rota has composed a main theme of delicate Renaissance flavor (historical period very dear to the musician, just thinking of his memorable scores for THE TAMING OF THE SHREW and ROMEO AND JULIET), inspired by the enigmatic beauty of the Mona Lisa, which the author reprises with orchestral variations alternating with folk music performed by blipped piano, accordion and trumpet. Only the END TITLES were included in a 3 CD box released in 2009 by GDM Music, dedicated to the thirtieth anniversary of the death of the famous composer. GDM Music is now proud to publish for the first time ever and in its complete edition this OST, conducted by Carlo Savina. This release on CD, duration 40:22, contains every note recorded at the time and well preserved on the stereo master tapes of the original session.