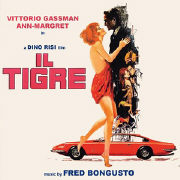 IL TIGRE (aka THE TIGER AND THE PUSSYCAT) is a comedy directed in 1967 by Dino Risi and starring Vittorio Gassman (David di Donatello winner as best protagonist actor),Ann Margret, Eleanor Parker, Fiorenzo Fiorentini, Antonella Steni, Luigi Vannucchi, Caterina Boratto, Jacques Herlin, Eleonora Brown, Giambattista Salerno, Nino Segurini, Consalvo Dell'Arti, Franco Gula, Egidio Casolari, Ruggero Orlando, Giovanni Ivan Scratuglia. A fortyfive happily married man and a general manager of a large company, engineer Francesco Vincenzini (Gassman) with pleasure, at least until that time, goes back home to take care of his daughter with mini skirt and his longhair son, or lazily lies beside the faithful wife (Parker). But the marriage of his daughter Luisella (Brown) and the birth of a grandson, together with the mocking jokes of his son, remind to Vincenzini of his old age. Just when he is feeling nostalgic for his youth, Carolina (Ann Margret), a emancipated girl student, makes him subject of her insistent persecutory love. After enduring the first assaults, the engineer ends up to capitulate and to becoming the lover of the girl. The new experience upsets all his life and causes him to overlook the company and the family. The film had a huge box office success in the movie season 1966-1967, and the leitmotif SPAGHETTI A DETROIT of the soundtrack, written and sung by Fred Bongusto, became a widely popular hit on radios, on TVs and in jukeboxes. Maestro Bongusto composed this Lounge Style OST with delicious variations of the main theme, arranged for harpsichord, organ, choir, with bossa and samba tempo that is introduced in TITOLI DI TESTA for large orchestra with jazz arrangement. For the making of this CD (TT 71:56) five master tapes (two in stereo, three in mono) of the original recording session were used, and that gave the chance to use any take contained in the reels. Unfortunately, SE BATTE FORTE (scene of Ann Margret watching TV) and LA PROVA DEL LEONE (sequence of the disco with Ann Margret and Vittorio Gassman dancing), 2 danceable tracks by Gianni Dell’Orso and Giuliano Facioni and performed by band I Rollini, went lost. Most probably they were recorded in a different session and at that time may be purposed for a 45 RPM single, never printed. --- from the label.