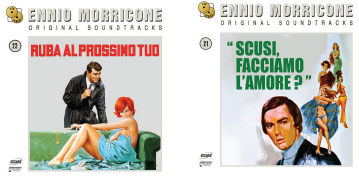 Pierre Clementi) an attractive orphan goes to live with his uncle in Milan and discovers that using his charms on wealthy ladies is more lucrative than working. When he finds out that women are interested in him only for their own gratification, he turns his attentions to a rich German lady. Director Caprioli pays more attention to the satirical humor in the dialogue than the display of piquancy’s. Ennio Morricone wrote one of his most erotic scores for this film. Praise to Edda Dell’Orso who used her most sensual voice for this score. The chorus I Cantori Moderni di Alessandroni did a great performance in the same style as most tracks have human voices used as an instrument and not as a choir. The male falsetto voice is by Franco Cosacchi. Some themes are haunting, others mysterious. Most of them are sensual and all music is written artistically. In the track A Lidia, an Indian sitar is used to give the music an exotic flavor. Bruno Nicolai conducted as Ennio Morricone did the orchestrations. It was Morricone’s first and only score for Caprioli who directed only seven films, he is more known as an actor in Italy. The score was first pressed in 1985 on a bootleg LP in the USA. The usual batch of 1000 LP's was ready for release when the FBI raided the place and confiscated all copies they could lay their hands on. The POO label was closed down and only a few SCUSI, FACCIAMO L’AMORE? albums survived. In Italy there was a legal vinyl single version released in 1968 and in 2001 came the first complete CD on GDM label. Now remastered for you to enjoy.

A FINE PAIR (1968) is the American title for this adventure-crime-comedy directed by Francesco (Citto) Maselli starring Claudia Cardinale and Rock Hudson. Esmeralda Marini (Cardinale), daughter of an Italian policeman, as a result of her education became a thief. Esmeralda got in trouble because of lack of routine. She appeals to a New York colleague of her father Captain Mark Harmon (Hudson) to return the stolen jewelry to the owner, but Mark discovers that she does not want to improve her life and more and more he gets carried away by her enthusiasm. Infact she steals again and she escapes to Rome, where Mark already felt in love, reaches her.There is unfortunately not much chemistry between Hudson and Cardinale. The film was shot in New York, Rome and some places in Austria, but was not a big hit and had a limited release internationally. The film is even today hard to find on DVD outside Italy. The best thing about the film is the music by Ennio Morricone who wrote a fantastic score for this comedy, with a great rumba as main theme vocalized by I Cantori Moderni di Alessandroni. This cheerful main theme will return in various arrangements with the vocals on every track. The orchestrations are as good as the compositions and sometimes you wonder what instruments you hear. Morricone composed only a few themes for this score that worked well in the film as Bruno Nicolai conducted. Track 4 for a scene in a dancing is a 60s disco theme with electronic organ and percussion with a great beat rhythm. Track 6, a samba for orchestra and tropical percussion, has a few notes from the Opera overture “La forza del destino” by Giuseppe Verdi. Morricone used this part of the overture also in STANNO TUTTI BENE (1990). The score for A FINE PAIR, maybe a bit repetitive, yet it is a jewel in the collection. In 2008 the mastertapes from this score were rediscovered when it was believed they were lost forever. Trivia: in 1968 Ennio Morricone wrote music for 25 films and it was his most productive year. Many consider this period as his best.