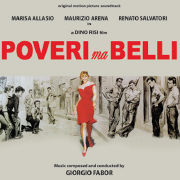 Digitmovies is proud to publish, for the first time on CD, in a de-luxe digipack edition, the OST by George Fabor for a commedia all’italiana genre classic, “Poveri, ma belli” (“Poor but beautiful), directed in 1957 by Dino Risi and played by Marisa Allasio, Maurizio Arena, Renato Salvatori, Memmo Carotenuto, Alessandra Panaro, Mario Carotenuto, Lorella De Luca, Virgilio Riento, Ettore Manni, Gildo Bocci, Sergio Cardinaletti, Mario Ambrosino, Claudine Astrella, Marcello Avallone, Luciano Basso, Luciano Berti, Ughetto Bertucci, Rossella Como, Tina De Santis, Riccardo Ferri. In a house located in one of the oldest districts of Rome, live two young bullies, Romulus (Arena) and Salvatore (Salvatori), boasters and braggarts, not work lovers, intent on finding easy love. Romulus is the lifeguard at a beach on the Tiber and Salvatore is a record store assistant. The two are close friends and their families are also tied. Not far from their home, a workshop is opened by a tailor who has a beautiful daughter, Giovanna (Allasio). The two young men court the girl, who works in her father's workshop and does not dislike their advances. The two are very different in temperament: Romulus is jovial and playful, while Salvatore is slightly bitter and jealous. Each of them sees himself as the chosen one, when in actual fact Giovanna is in doubt and is unable to decide. At the end, she resolves to promise herself to Salvatore, but when Romulus pretends to kill himself through the disappointment of losing her, things go back to how they were before, until Giovanna meets a previous boyfriend, with whom she is still in love. Romulus and Salvatore are disappointed, but do hesitate to console themselves: each of the two survives the crisis, each one courting the sister of the other. At the time, an album (VOX VL 3200) with thirteen songs and a 45 EP (VOX VIP 31-020) with five selections were released. For our new CD lasting a total of 71 minutes, we had access not only to the master of the extremely rare original album, but also to the recording session in mono (the reels have been preserved in excellent condition after 56 years), which allowed us to include also the whole OST in the film version, since for the 33 rpm, the composer Fabor had created an assembly of various takes, with the aim of offering a better listening experience. The author created an orchestral OST that honours the city of Rome and its people, alternating a melodious main theme with a pleasant popular atmosphere and dance tunes such as mambo and Rock 'n' Roll. This CD is intended as a sincere tribute to the Golden Age of Italian Cinema and as a truly rare OST to be enjoyed by all film buffs and music lovers across the world.-- from the label.