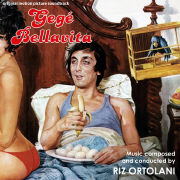 The complete edition OST by Riz Ortolani for the film “Gege Bellavita” (aka “Genarino, hombre objeto femenino”) for the absolute first time on CD.

Riz Ortolani composed "Nun me scuccia", the brilliant and funky main theme sung in Neapolitan by the protagonist Flavio Bucci, which describes Gege’s laziness to work and his passion for women. This pleasant motif returns in an instrumental version, alternating with a recurring upbeat tarantella in a pop version, and a romantic love theme. Originally C.A.M. published only one single (C.A.M. AMP 222) with two tracks (tracks 1 and 2). We were able to access the masters in stereo from the original recording session, which allowed us to use everything that had been recorded. This is another CD that enriches the discography of one of the most beloved composers in the world.

Gennaro Amato, known as Gege, married Agata when he was very young and had nine children with her. Nevertheless, while she is busy from morning to night caring for the family and working as doorkeeper of the building, Gennaro is chronically lazy and finds a hundred excuses not to do what his wife tries to get him to do. Gennaro is well-endowed, and in addition to satisfying his wife, who he sincerely loves, he cannot resist the temptation of the other tenants: Rosa, Pupetta, Adelina, Iolanda, and Mercedes, who all use various excuses to attract him into their apartments and seduce him. Agata, who is pregnant again, finds out what has been going on. Once she manages to get over her jealousy, she decides to arrange for her husband's services to be paid for. The large revenue makes the Amato family rich. Gennaro discovers Agata's paysheets, gets angry, and runs off to the Duchess Attanasi, who wants to keep him as her lover. The new relationship does not last long, partly because it is completely unnatural for Gennaro, and he ends up returning to Agata.-- from the label.