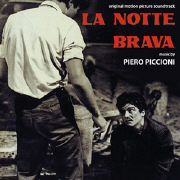 Piero Piccioni (Turin, December 6, 1921 - Rome, July 23, 2004) wrote and directed this score where jazz and blues create the right atmosphere for the young protagonists of the story. Originally, not a single note was released from this prestigious soundtrack. Our CD, lasting a total of 70:27 minutes, was possible thanks to the mono master tapes from the original recording session.

Maestro Piccioni composed a recurring main score which is introduced in the opening credits (Tr.1) and reprised in different versions: slow for bassoons (Tr.4), with horns (Tr.5), a fast swing (Tr.17) and with the addition of female voices (Tr.21). Piero Piccioni alternates this with numerous dance melodies like the mambo (Tr.2, Tr.12, Tr.26), rock’n’roll (Tr.3), swing (Tr.7), tango (Tr.20, Tr. 25) and the song with a female voice, 'Hello you,' (Tr.9, Tr.24) which is reprised in an instrumental version (Tr.18, Tr.29). The inner side of the main characters is emphasized by very evocative passages like in Tr.14, Tr.15, Tr.19. This album is another masterpiece by Piero Piccioni which has finally been recovered and preserved on CD forever.

Scintillone (Brialy) and Ruggeretto (Terzieff) are two Roman working class men who are unemployed. After committing a robbery, they try to sell the stolen goods with the help of some other guys: Gino, nicknamed Bella-Bella (Interlenghi), and Supplizia (Lualdi) and Anna (Martinelli)- two prostitutes. After pocketing the money, the men entertain themselves with the women and then try to cheat them out of their money and leave them in the middle of nowhere. Once the three guys are back in town, they realize that the women had actually robbed them of all their money. After trying in vain to track them down again, they attempt to steal a camera out of a luxury car, which fails when the owner of the car arrives with his two friends. They end up in a fight, but then everyone makes peace and goes to the luxurious apartment of Achilles (Milian), the rich owner of the car. Bella-Bella goes around Achilles’ apartment and then steals 200,000 lira and runs away with his two friends. Deciding how to divide up the money causes another fight and the money ends up with Scintillone, who takes Rossana (Schiaffino) to a night club. Ruggeretto has started looking for the two and arrives just in time to see his friend get arrested and taken away by the police. Ruggeretto and Rossana spend all of the money stolen from Achille’s house. After taking Rossana back at dawn, Ruggeretto returns home and finds the last of the money while fumbling in his pockets. Disgusted, he throws it away. Limited edition 300 copies - Digitmovies
Release Date: 2018/11/7