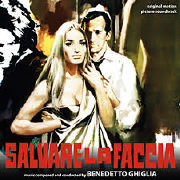 Benedetto Ghiglia (Fiesole, December 27, 1921 - Rome, July 4, 2012) was able to represent the young protagonist in the film through music with a swing motif sung in English by a female voice. It’s introduced by dissonant strings, and then develops into a romantic and dramatic crescendo for orchestra and choir (Tr.1) and then into a baroque theme in rock beat (Tr.2). The composer also wrote a wild shake for the various dance scenes, such as when the young beatniks show up at the business magnate's villa (Tr.5, Tr, 8, Tr.10), and the scene with the hippie protestors (Tr.14) where the Cantori Moderni di Alessandroni give an incredible performance (much like that of the advertisement of a famous brand of textile fibers in 1967/1968 which had music composed by Ghiglia). The composer created the perfect atmosphere for the time period of the film in which the girl with an angelic face and rebellious soul vindictively manipulates the people around her like puppets after being forced by her father to pretend she was crazy in order to cover up a scandal. The dark side of the story is emphasized by psychedelic crime adventure music with harpsichord, percussion, organ, female sighs (Tr.3) and rhythmic experimental jazz (Tr.13, Tr, 15, Tr.20, Tr.26).

Originally C.A.M. had published an EP single (AMP 56) with two tracks in mono which we’ve included as bonus tracks: ''Love your neighbor'' (side A) and ''Una faccia da salvare '' (side B) which are also found in the original stereo mix. For our CD (total running time 73:53 minutes) we had access to the master tapes in mono and in stereo from the original recording session, which allowed us to use everything that had been recorded for the film, apart from one version of the baroque theme which was sung in English by the author of the lyrics. This was created separately only for the re-edited version, with added scenes, for the American market. This album is a tribute to the recovery and preservation of the musical art of Benedetto Ghiglia.

Licia Brignoli, the daughter of a well known business magnate, is photographed at a brothel with her boyfriend Mario, who had arranged the whole ordeal to use as blackmail. In order to avoid a scandal, Licia’s father pays Mario 20 million and passes Licia off as crazy and commits her to a mental institution. Once Licia is released, she returns home to take her revenge. Limited edition 300 copies - Digitmovies
Release Date: 2018/10/8