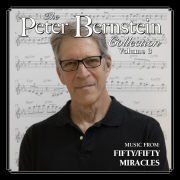 Released in 1992, FIFTY/FIFTY tells the story of Jake (Peter Weller) and Sam (Robert Hays), two mercenaries who run into each other on Tengara, a remote South Seas island where a revolution seems to take place every other day. Recruited by the CIA to overthrow a power-mad dictator, they are tasked to raise an army. But the choices are few and the odds against them are high, until they meet Suleta (Ramona Rahman), a beautiful freedom fighter who helps them get started.

FIFTY/FIFTY was directed by veteran actor Charles Martin Smith, who also co-stars as Martin Sprue, the CIA handler in charge of Jake and Sam. Filming was split between the island of Penang and the Central Malaysian state of Perak, according to the production notes.

FIFTY/FIFTY is an orchestral score, recorded with an orchestra of 65 musicians. Bernstein’s music is based around a single primary theme, energized by propulsive brass attacks and powerful intonations of full orchestra.

Released in 1986, MIRACLES tells the story of Jean (Teri Garr) and Roger (Tom Conti), a newly divorced couple who learn the hard way that when you are meant to be together, nothing can keep you apart. As the film continues, Jean and Roger keep running into each other, literally... A robbery gone wrong results in a police chase, with the robber crashing into Jean’s car and then Roger’s car, which happens to be nearby. The robber kidnaps both Jean and Roger and forces them to drive, leading to an elaborate madcap chase across international borders, multiple crazy situations and ultimately to Jean and Roger’s reunion.

For MIRACLES, Peter Bernstein provides an appropriately exciting musical score for this wild comedic ride. Bernstein’s breathtaking score ranges from the exotic drums and synth of the opening jungle sequence to a richly arranged celebratory finale. The score was recorded at the old CTS Studios in Wembley, England, on the world’s first DSP digital mixing console and performed by members of the Royal Philharmonic Orchestra.

The son of Academy Award winning film composer Elmer Bernstein (THE MAN WITH THE GOLDEN ARM, THE TEN COMMANDMENTS, THE MAGNIFICENT SEVEN, TO KILL A MOCKINGBIRD, GHOSTBUSTERS), Peter Bernstein grew up around recording stages, watching his father work and absorbing as much as he could. His musical education began with piano lessons. He eventually decided he wanted to be a bass player and studied bass with Carol Kaye, a member of the legendary ‘Wrecking Crew’ group of LA studio musicians. Around the same time, Peter was also studying with pioneering electronic music composer Morton Subotnick. He began his professional career as a rock n’ roll bass player at age 14 and worked in the record business as a touring bass player, band member, session player, arranger and record producer for the next 20 years. As time passed it became clear that there was going to be more opportunity for him as a composer and Peter began by working for other composers as an orchestrator and arranger. He orchestrated all or part of almost all of his father’s scores from 1974-1986, while still working in the rock n roll record business. Orchestration credits from the era include ANIMAL HOUSE, TRADING PLACES and GHOSTBUSTERS, as well as the scored portions of Michael Jackson’s THRILLER video. His credits as composer include HOT DOG… THE MOVIE, BOLERO, THE EWOK ADVENTURE, MY SCIENCE PROJECT, EWOKS: THE BATTLE FOR ENDOR, THE ALAMO: THIRTEEN DAYS TO GLORY, CANADIAN BACON and PUPPET MASTER VS DEMONIC TOYS. For television, his credits include 21 JUMP STREET, BOOKER, FALLEN ANGELS, CHICAGO HOPE, ROUGH RIDERS, MOWGLI: THE NEW ADVENTURES OF THE JUNGLE BOOK and HONEY, I SHRUNK THE KIDS: THE TV SHOW.

Dragon’s Domain Records presents THE PETER BERNSTEIN COLLECTION, VOLUME 3, featuring music composed and produced by Peter Bernstein for FIFTY/FIFTY and MIRACLES, presented for the very first time on compact disc. The music has been mastered by James Nelson at Digital Outland and the liner notes have been written by noted author Randall Larson, with the participation of the composer.

THE PETER BERNSTEIN COLLECTION, VOLUME 3 is a limited edition release of 500 units.
This title is expected to ship on the week of November 1st, 2022. 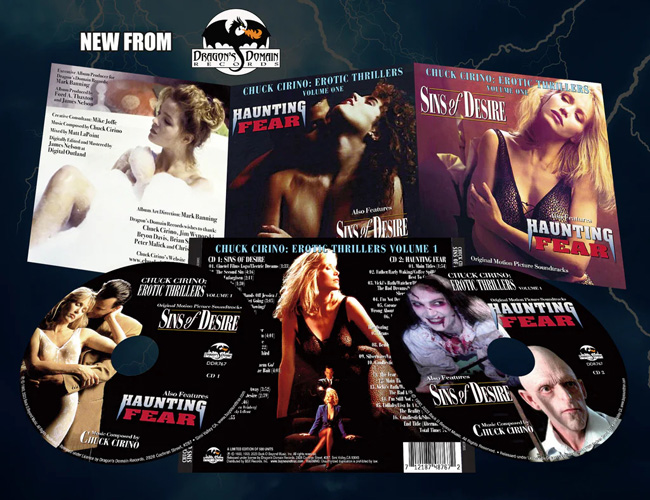