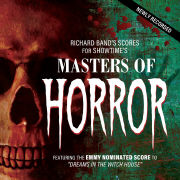 Dragon’s Domain Records presents a new release featuring newly recorded music from MASTERS OF HORROR. MASTERS OF HORROR includes music composed by Richard Band (RE-ANIMATOR, FROM BEYOND, TROLL) from the 2005 - 2007 series created by director Mick Garris (THE STAND (TV), THE SHINING (TV), SLEEPWALKERS), from three episodes specifically, presented on two discs. From the first season, ‘Dreams In The Witch House’ and from the second season, ‘Valerie On The Stairs’ and ‘The Washingtonians’.

From the first season of MASTERS OF HORROR, ‘Dreams In The Witch House’ was adapted from the short story by H.P. Lovecraft and aired in November 2005. This episode reunited composer Richard Band with director Stuart Gordon, continuing their collaboration on Lovecraft material that began with the theatrical release RE-ANIMATOR in 1985. This episodes tells the story of Walter Gilman, a college student renting an old room in a boarding house who discovers a sinister plot by otherworldly forces to sacrifice his neighbor Frances’ baby, Danny to unlock the ancient Necronomicon.

From the second season of MASTERS OF HORROR, ‘Valerie On The Stairs’ was adapted from a short story by Clive Barker and aired in December 2006. This episode was directed by Mick Garris. Rob Hanisey, an unsuccessful writer, rents a room in the Highberger House to write a novel and discovers there are fates worse than literary anonymity when he encounters Valerie,a mysterious woman and a stalking demon spawned from the imagination of three of the tenants.

Also from the second season, ‘The Washingtonians’, from a short story by Bentley Little and directed by Peter Medak (THE CHANGELING). In this episode, Mike Franks finds his family in danger after he discovers a strange letter hidden behind a portrait of George Washington which contains a shocking secret about the United States of America's founding fathers, in which a secret society is hell-bent on keeping quiet at any cost.

Richard Band was born in Los Angeles on December 28, 1953. He is the son of film producer-director-writer Albert Band (THE RED BADGE OF COURAGE - screen adaptation), brother to producer-distributor Charles Band and uncle to young rock star Alex Band of the rock group ‘The Calling’. Shortly after his brother Charles had formed his first movie company, Richard decided to take a break from music and began to work as an assistant director on some of his films. He then went from assistant director to production manager, to associate producer and finally producer on over 13 films. Richard has since gone on to score over 75 feature films and many television productions including multiple episodes of STARGATE SG-1, WALKER: TEXAS RANGER and Disney's SING ME A STORY series.

MASTERS OF HORROR is a limited edition release of 500 units.
Release Date: The week of January 10th. 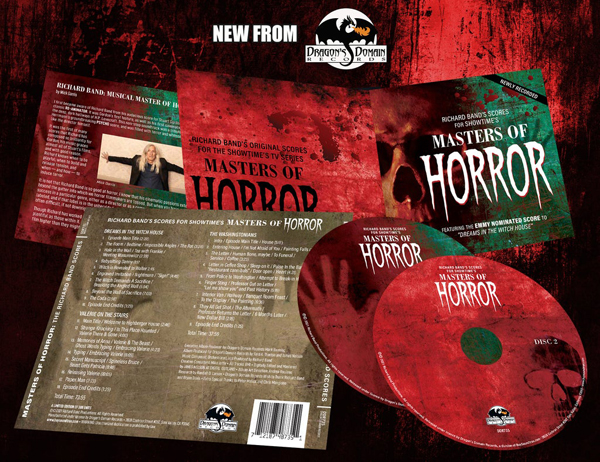