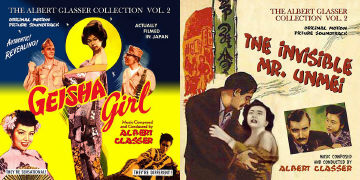 Dragon’s Domain Records presents THE ALBERT GLASSER COLLECTION Volume 2, featuring the premiere releases of Albert Glasser’s music for UNMEI (1951, aka THE INVISIBLE MR. UNMEI, aka ORIENTAL EVIL) and GEISHA GIRL (1952). The former film is a crime thriller and the latter is a comedy drama, both taking place and filmed in Japan, both co-directed and co-produced by C. Ray Stahl and George P. Breakston, known for TOKYO FILE 212, JUNGLE STAMPEDE, and the like.

Albert Glasser, known for his 1950s science fiction scores for INVASION U.S.A., THE INDESTRUCTIBLE MAN, THE AMAZING COLOSSAL MAN, EARTH VS THE SPIDER, TEENAGE CAVEMAN, and many more, scored music for more than a hundred movies from 1944 to 1973, in all manner of genres. Although his expertise and talent deserved far better offerings than the kind of potboilers typically made by the B-movie studios, he made the most of the resources budgets would permit, and came up with a significant body of work which has and is being celebrated for its skill and inventiveness.

UNMEI, which means “fate” in Japanese, is, according to legend, an invisible supernatural entity who only appears to evil men, knowing the secret passions hidden in their minds. This film tells the story of one such evil man, a corrupt businessman named Roger Mansfield, whose actions threaten or provoke the deaths of the women who love him and the men who trust him. Byron Michie plays Roger, while Martha Hyer co-stars as Cheryl Banning, who arrives in Tokyo to inquire about the untimely death of her brother, and falls under Roger’s spell. Tetsu Nakamura (THE MYSTERIANS, THE H-MAN, MOTHRA) plays Noritomu Moriaji, a local businessman and uncle of Roger’s former mistress. Throughout the film Glasser’s symphonic score is authoritative in engaging the drama, suspense, and revelation of the story, incorporating the famous Japanese folk tune, “Sakura Sakura,” as both a love theme and as a motif of irony as Roger’s crimes evolve. A theremin is used throughout the score in a variety of treatments, its wavering tonalities increasing as Roger’s guilt is painted in haunting musical colors. The film also allows the composer to provide some splendid period-flavored orchestral dance band music, and he also uniquely interpolates the Brahms Wedding Concerto for a Japanese wedding sequence.

GEISHA GIRL is a comedy-romance movie with heavy emphasis on slapstick. Like UNMEI, it was filmed in Japan and has a minor bit of the supernatural woven into the film as it follows a pair of naive G.I.s, Rocky Wilson (Steve Forrest) and Archie McGregor (Archer MacDonald), who are on leave in Tokyo. While there, they run into a spy ring, discover the stewardess Rocky is dating (Martha Hyer) is a secret government agent investigating that spy ring, and happen to attract the ire of the head of that spy ring, Tetsu Nakano (Tetsu Nakamura). Meanwhile, the local police call in mystical hypnotist Zoro (Dekao Yokoo) to aid them in tracking down the baddies. All ends in hilarity and love and a huge fight in a geisha house. Glasser’s score is a mix of exciting, almost over-the-top symphonic action music while providing the right amount of tension, inserting bits of adventurous Japanese sight-seeing music, and keeping everything light, rousing, and fun.

THE ALBERT GLASSER COLLECTION Volume 2 is a limited edition release of 500 units.