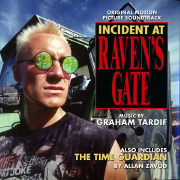 Reissue. Dragon’s Domain Records presents the original motion picture soundtrack releases of INCIDENT AT RAVEN’S GATE, featuring music composed by Graham Tardif, along with THE TIME GUARDIAN, featuring music composed by Allan Zavod, for two cult science fiction films produced by Antony I. Ginnane from the late 1980’s era of Australian cinema. Between 1976 and 1988, Ginnane made some of the most famous Australian films of that era.

Released in 1988, INCIDENT AT RAVEN’S GATE, also known as ENCOUNTER AT RAVEN’S GATE, tells the story of an ex-con named Eddie (Steven Vidler) who, upon release from prison, begrudgingly decides to work for his brother Richard (Ritchie Singer), who is an innovative agriculturist experimenting with hydroponics to advance farming techniques in the remote areas of Australia. After a series of unexplainable events occur on Richard’s land (birds falling from the sky, vast quantities of water disappearing, strange unexplainable lights, missing persons), the local authorities focus their attentions on Eddie.

The music for INCIDENT AT RAVEN’S GATE was composed by Australian composer Graham Tardif. Regarded as one of Australia’s premiere composers for film, Tardif began his career in cinema as a sound editor before switching to composing. He and director Rolf de Heer formed a professional relationship spanning five decades with projects including TALE OF A TIGER (1984), BAD BOY BUBBY (1993), THE QUIET ROOM (1996), ALIEN VISITOR (1997), THE TRACKER (2002), DR. PLONK (2007), THE KING IS DEAD! (2012), and STILL OUR COUNTRY (2014). Tardif’s music for INCIDENT AT RAVEN’S GATE sounds like a quintessential sci-fi soundtrack from the 1980s chock-full of bouncy electronic arpeggios, quivering string pads, orchestral samples, and hordes of contrasting synth textures.

Released in 1987, THE TIME GUARDIAN, with its cutting-edge special effects, was the second largest production ever attempted in Australian cinema at that time. THE TIME GUARDIAN was directed by Brian Hannant, co-written with John Baxter, and starred Tom Burlinson, Nikki Coghill, Dean Stockwell, and Carrie Fisher.

THE TIME GUARDIAN is set in the year 4039, where an army of subterranean cyborgs called the Jen-Diki are threatening mankind with extinction. Semi-protected within the confines of their force-shielded city, the last bastion of human civilization makes plans to save the remaining survivors of the devastating Neutron Wars. With the city under siege by the Jen-Diki, two courageous soldiers name Ballard (Burlinson) and Petra (Fisher) travel back in time to 1988 on a desperate mission to scout a suitable landing site for their beloved city to escape.

The music for THE TIME GUARDIAN was composed by Australian pianist, composer, conductor, and jazz musician Allan Zavod. A graduate of the University of Melbourne Conservatorium in 1969, Zavod composed scores for more than forty American motion pictures and television shows and toured with the legendary Frank Zappa in 1984. His film scores include THE RIGHT HAND MAN (1987), HOWLING III (1987), MARTIANS GO HOME (1989), FULL FATHOM FIVE (1990), BACK IN BUSINESS (1997), and DEAD END (1999). Zavod’s music for THE TIME GUARDIAN is an epic operatic-sounding score performed with cutting-edge orchestral synths and samplers of the era. It’s a rousing science-fiction action-adventure score with bombastic clashing chords, cascading chromatic string passages, and percussion reminiscent of THE TERMINATOR.

INCIDENT AT RAVEN’S GATE/THE TIME GUARDIAN is a limited edition release of 500 units.