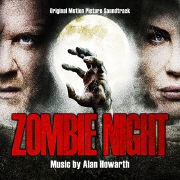 Airing on the SyFy Channel in 2013, ZOMBIE NIGHT was produced by The Asylum, and directed by John Gulager, known for his FEAST trilogy of vastly entertaining monster movies, PIRANHA 3DD, and CHILDREN OF THE CORN: RUNAWAY. ZOMBIE NIGHT is a low-budget zombie thriller in which the dead rise and begin consuming hapless members of humanity?the usual favored zombie trope?only in Gulager’s zombie world, adding an interesting twist from vampire lore, the walking dead return to their deathly slumber when the sun rises.

Alan Howarth, in addition to being a composer, is an accomplished sound designer and editor, having worked on films such as STAR TREK: THE MOTION PICTURE, POLTERGEIST, TOTAL RECALL, ARMY OF DARKNESS, BRAM STOKER’S DRACULA, STARGATE and many others. He has been a frequent music collaborator with John Carpenter on his films beginning with ESCAPE FROM NEW YORK in 1980 and including HALLOWEEN II & III, CHRISTINE, BIG TROUBLE IN LITTLE CHINA, THEY LIVE and PRINCE OF DARKNESS and Alan has scored many films on his own, including RETRIBUTION, HALLOWEEN 4 & 5, THE DENTIST, HEADLESS, BOO!, EVILUTION, BASEMENT JACK and most recently, HOUSE AT THE END OF THE DRIVE, BRUTAL and PROMISE.

ZOMBIE NIGHT is a limited edition release of 500 units