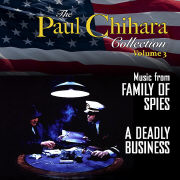 Dragon’s Domain Records presents the PAUL CHIHARA COLLECTION, VOLUME 3, featuring music composed, conducted and produced for two films by Paul Chihara (DEATH RACE 200O, PRINCE OF THE CITY, CHINA BEACH). Composer Paul Chihara has had one foot in film scoring (having composed scores for over 90 motion pictures and television series) and the other in concert music for more than 45 years. Among his efforts in Hollywood film scoring are the two made-for-TV movies that make up this third collection of Chihara’s film music, which are presented here on CD for the first time.

Both films are based on true stories - A DEADLY BUSINESS tells the story of an undercover operation to combat corruption in the toxic waste-hauling business, FAMILY OF SPIES is a two-part miniseries about a naval officer who engaged in espionage for Soviet Russia against his own country. Chihara’s scores for these films are intriguing hybrids of acoustic orchestra and analog electronic music, both quite different in tone and style, and each making for engaging listening on their own.

Airing on television in 1990, FAMILY OF SPIES was a two part mini-series based on the true story of John A. Walker, Jr., a United States Navy chief warrant officer and communications specialist convicted of spying for the Soviet Union between 1968 and 1985. He involved his older brother and his son, and attempted to coerce his daughter in the gambit until his wife discovered his treachery. FAMILY OF SPIES ironically was broadcast as the Cold War itself was ending. Powers Boothe starred as Walker, Jr., with Lesley Ann Warren playing his wife, Lili Taylor as his daughter, and Andrew Lowery as his son. The movie was directed by Stephen Gyllenhaal (PARIS TROUT, A DANGEROUS WOMAN, HOMEGROWN).


Chihara’s score for FAMILY OF SPIES is based on a trio of famous musical pieces. The first is the Dies Irae, best known from its use in the Requiem (Catholic Mass for the Dead). Its melody has oft been quoted in musical literature and horror film scores. In addition, Chihara utilized the Russian Easter Theme (another liturgical piece of music made famous by Rimsky-Korsakov and also interpolated by other composers), and the third motif is from the Soviet National Anthem. The Russian themes are contrasted against a very pretty, harmonic melody for the family performed on strings and keyboard.


Broadcast on CBS just once in 1986, A DEADLY BUSINESS stars Alan Arkin, Armand Assante, Michael Learned, and Jon Polito, directed by John Kory (THE AUTOBIOGRAPHY OF MISS JANE PITTMAN, OLIVER’S STORY, THE EWOK ADVENTURE). Arkin plays Harold, an ex-con who risks his life to expose organized crime’s involvement in the illegal dumping of toxic waste, becoming an FBI informant and providing information that results in the arrest and incarceration of numerous criminals before retiring into the witness protection program.


Dragon’s Domain Records is excited to bring Paul Chihara’s music for A DEADLY BUSINESS and FAMILY OF SPIES to compact disc for the first time on THE PAUL CHIHARA COLLECTION, VOLUME 3, mastered by James Nelson at Digital Outland with exclusive liner notes by author Randall D. Larson, including the participation of the composer.

The composer’s approached his score to A DEADLY BUSINESS as he would a film noir. The sound includes saxophone and trumpet, but also elements of melodic jazz and pop given a dark tonality that fit the film’s storyline and personality, presented in a hybrid mix of analog electronic material and acoustic orchestral music. The score maintains an effective contrast between light melodic music from piano and trumpet and the darker materials created with sustained and percussive electronic tonality, menacing violins, and an intriguing interplay between cello and electronics.
Both movies feature first-rate action/suspense scores, with a fusion of electronic and acoustic instrumentation that is both compelling and effectual. Both are excellent examples of the early integration of acoustic orchestras with electronic synthesis. Limited 500 copies