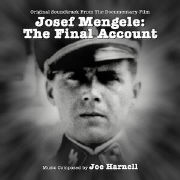 Reissue. Dragon’s Domain Records, to be distributed through buysoundtrax.com, presents the soundtrack release of FOR THE TERM OF HIS NATURAL LIFE/THE WILD DUCK, featuring music composed and conducted by Simon Walker for two projects for Australian television and film.

FOR THE TERM OF HIS NATURAL LIFE aired on Australian television in 1983 as a two part series directed by Rob Stewart, starring Colin Friels, Anthony Perkins, Patrick Macnee, Diane Cilento and Samantha Eggar. FOR THE TERM OF HIS NATURAL LIFE was based on the novel by Marcus Clarke, first serialized in Australia in the late 1800s and the subject of an early feature film in 1927. The mini series tells the story of a young English gentleman (Friels) wrongfully convicted of murder and sentenced to life imprisonment at a Tasmanian penal settlement. Adopting the name “Rufus Dawes” to protect his family, he tries to survive the rigors of hard labor but gradually becomes a hardened convict. His manner is softened when he falls in love with the young daughter of an officer at the colony. When Dawes learns that his English title and inheritance have been stolen from him during his incarceration, he escapes and seeks revenge on those who wronged him.

Simon Walker was hired to score FOR THE TERM OF HIS NATURAL LIFE because the filmmakers had been impressed by the music he’d written on previous films. The result is a large scale orchestral score largely centered on Walker’s main theme, a heraldic melody favoring brass, strings, and rolling percussion and also including a rapturous love theme for Dawes and Sylvia, along with a spritely woodwind and violin motif associated with the character of Reverend Meekin (Perkins).

THE WILD DUCK was Simon Walker’s first feature film score, based on Norwegian playwright Henrik Ibsen’s tragicomedy. Directed by French-born Australian filmmaker Henri Safran and adapted and anglicized by the director along with Tutte Lemkow and John Lind with “additional material” by Peter Smalley, the film starred Jeremy Irons, Liv Ullmann, Lucinda Jones, Arthur Dignam, and Michael Pate. Set in a small industrial Australian town THE WILD DUCK concerns a couple, Harold and Gina (Irons and Ullmann), who are forced to answer for the legitimacy of their adolescent daughter Henrietta (Jones) when her true father, Gregory (Dignam), comes to town. Figuring into the drama is a wild duck that has been wounded by Gregory's father (Pate) and rescued by Henrietta; its symbolism looms over the stifling household as personalities reach a heartrending climax.

It was Walker’s score to FOR THE TERM OF HIS NATURAL LIFE that led to being hired for THE WILD DUCK. While his instincts were to score THE WILD DUCK with a very gentle small scale orchestral score, the producer and the director had other ideas and preferred a full blown symphonic score with lots of strings. His score for THE WILD DUCK is written in a warm, Romantic style like FOR THE TERM OF HIS NATURAL LIFE and includes a main theme that is thoroughly engaging, coloring the drama and reflecting the conflicts of the story.

Simon Walker was born in Sydney in 1961, and by the age of twelve he had developed a keen interest in music after tinkering with the family piano. He attended the Sydney Boys High School (1974-1980) as a selective student (for academic achievements) and was heavily involved in the music department during his years there. At the age of 17, Walker won the Australian Broadcasting Corporation’s “Young Composers Competition” with his entry “Fibres,” which was later performed in concert by the Sydney Symphony. Like many composers starting out, Walker’s first film scores were for student productions in the late 1970s. His first professional commission came in 1979, to score THE THINGS WE WANT TO KEEP, a Film Australia documentary about the richness and variety of the country’s national heritage. By the early 1980s Walker was an in-demand composer, scoring a number of notable films and TV movies, including a series of animated films based on popular literary novels for Burbank Films Australia which were shown on American television. By his untimely death at the age of 48, after a career that lasted only sixteen years, Walker had composed dozens of films and television episodes and was among the most respected of Australian film composers.

Both FOR THE TERM OF HIS NATURAL LIFE and THE WILD DUCK were released previously in the early days of the compact disc format and have been difficult to find over the years. Dragon’s Domain Records is pleased to bring these wonderful scores back into the marketplace now newly remastered by Digital Outland for new listeners to discover Simon Walker’s incredible talent and including liner notes by author Randall Larson.

FOR THE TERM OF HIS NATURAL LIFE/THE WILD DUCK is a limited edition release of 500 units.