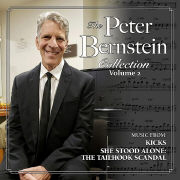 Released in 1985, KICKS was a television movie produced by ABC Circle Films, directed by William Wiard, written by David Levinson and starring Anthony Geary, Shelley Hack, Tom Mason, Ian Abercrombie, Susan Rutan and James Avery. KICKS tell s the story of Martin (Geary), a wealth man living life on the edge by engaging in dangerous life-threatening activities. Martin becomes involved with Maggie (Hack), a university professor who has the same proclivities. Martin and Maggie start playing games to feed their dangerous addictions, games with ever escalating stakes. During one of these games, a staged robbery, a guard is killed, shaking Maggie back to a frightening reality. When she tries to confess the crime, Martin turns on her and begins to hunt her. If she wants to survive, she’s going to have to rely on her wits.

KICKS was Bernstein’s ninth film and third TV movie score, following 1984’s THE EWOK ADVENTURE and preceding MY SCIENCE PROJECT and EWOKS: THE BATTLE OF ENDOR and others later in 1985. The score for KICKS is a blending of small orchestra and electronic elements. This score was recorded at Evergreen Studios in Burbank. Bernstein also produced an arrangement of the Paul Revere and the Raiders’ song “Kicks,” from which the film takes its name.

Airing on television in 1995, SHE STOOD ALONE: THE TAILHOOK SCANDAL was directed by Larry Shaw, written by Suzette Couture and starring Gail O’Grady, Bess Armstrong, Cameron Bancroft, Matt Clark, Hal Holbrook, James Marshall, Robert Urich and Rip Torn. SHE STOOD ALONE tells the story of Lt. Paula Coughlin (O’Grady) when she was assigned as an Admiral’s assistant at Tailhook, an annual US Navy convention held in Las Vegas. Attended predominantly by male officers who frequently get out of control like they are on leave, Coughlin is subjected to ‘The Gauntlet’, where she is man-handled and harassed relentlessly by these male officers. Refusing to be a silent victim, Coughlin fights for her rights and to bring her attackers to justice.

Bernstein was brought into this project through producer William Greenblatt, who he had worked with previously on NIGHTBREAKER and would work with again on TARGET EARTH. Bernstein’s score is very eloquent in its treatment, which featured a live group of musicians. The score is built around a noble main theme for brass, associated with Paula’s dedication to the Navy. In addition to the main theme for solo trumpet or French horn, several cues for marching snare and bass drums convey additional militaristic elements. The TAILHOOK score was recorded in Salt Lake City with a small orchestra, overdubbed in a few places by synths.

The son of Academy Award winning film composer Elmer Bernstein (THE MAN WITH THE GOLDEN ARM, THE TEN COMMANDMENTS, THE MAGNIFICENT SEVEN, TO KILL A MOCKINGBIRD, GHOSTBUSTERS), Peter Bernstein grew up around recording stages, watching his father work and absorbing as much as he could. His musical education began with piano lessons. He eventually decided he wanted to be a bass player and studied bass with Carol Kaye, a member of the legendary ‘Wrecking Crew’ group of LA studio musicians. Around the same time, Peter was also studying with pioneering electronic music composer Morton Subotnick. He began his professional career as a rock n’ roll bass player at age 14 and worked in the record business as a touring bass player, band member, session player, arranger and record producer for the next 20 years. As time passed it became clear that there was going to be more opportunity for him as a composer and Peter began by working for other composers as an orchestrator and arranger. He orchestrated all or part of almost all of his father’s scores from 1974-1986, while still working in the rock n roll record business. Orchestration credits from the era include ANIMAL HOUSE, TRADING PLACES and GHOSTBUSTERS, as well as the scored portions of Michael Jackson’s THRILLER video. His credits as composer include HOT DOG… THE MOVIE, BOLERO, THE EWOK ADVENTURE, MY SCIENCE PROJECT, EWOKS: THE BATTLE FOR ENDOR, THE ALAMO: THIRTEEN DAYS TO GLORY, FIFTY/FIFTY, CANADIAN BACON and PUPPET MASTER VS DEMONIC TOYS. For television, his credits include 21 JUMP STREET, BOOKER, FALLEN ANGELS, CHICAGO HOPE, ROUGH RIDERS, MOWGLI: THE NEW ADVENTURES OF THE JUNGLE BOOK and HONEY, I SHRUNK THE KIDS: THE TV SHOW.

Dragon’s Domain Records presents THE PETER BERNSTEIN COLLECTION, VOLUME 2, featuring music composed and produced by Peter Bernstein for KICKS and SHE STOOD ALONE: THE TAILHOOK SCANDAL, presented for the very first time on compact disc. The music has been mastered by James Nelson at Digital Outland and the liner notes have been written by noted author Randall Larson, with the participation of the composer.

THE PETER BERNSTEIN COLLECTION, VOLUME 2 is a limited edition release of 500 units.
This title is expected to ship on the week of August 8th. 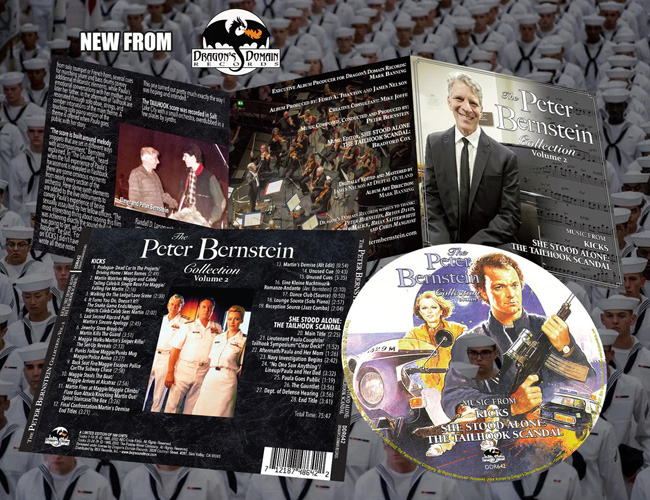