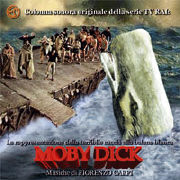 Moby-Dick or The Whale, known in Italy as The white whale Moby Dick, is a story written by American writer Herman Melville, published in America in 1851. The plot of the book is the journey of the whaler Pequod, commanded by Captain Ahab, who sailed the seas forever without stopping, to hunt whales and sperm whales, but in particular, obsessively trying to capture the huge ghostly white whale (which was actually a sperm whale), making this constant travel an allegory and at the same time an epic. The book, translated into Italian in 1941 by the writer Cesare Pavese, did not meet a favorable review at the time, but today it is recognized worldwide as one of the masterpieces of American fiction.In March and April 1973, RAI broadcasted the story as a television drama entitled: “The representation of the terrible hunting the white whale Moby Dick.” This television history was divided into 5 episodes and it was directed by Carlo Quartucci, screenplay by Roberto Lerici, Franco Parenti and Rino Sodano. Maestro Fiorenzo Carpi De Resmini, one of the greatest composers of the 900, was chosen to compose the soundtrack of the drama. Giorgio Strehler, great director and theatre director, told about him: “... My theater is held together by the notes of Fiorenzo Carpi. Very often, since the beginning or during the work, his music has given the internal clarification that I needed, the lighting of a whole that I could not grasp…”Within television and film, Maestro composer Carpi De Resmini is from time to time involved in different situations, but always extremely challenging. His musical creation should eventually help to strengthen and highlight the images and situations that the movie describes, without overpowering, but musically amalgamating them.It 's rare that a song can enjoy a life of its own when it meets the above criteria, but this is not the case with the soundtrack composed by Maestro Fiorenzo Carpi for RAI’s “Moby Dick”, because every song lives of its own personality and emphasizes faithfully every character and all situations that are part of the story.In the “Ballad of Sailor”, sung by young and talented Gigi Proietti, we find a perfect description of the violent, dirty and desperate life of the sailors aboard whaling ships. The instrumentation is the essential one, composed of all those little tools that the same crew could have carried aboard to make the journey less burdensome, as the harmonica, fiddle, banjo, flute, etc. .. These tools are a counterpoint to a men's chorus (the crew) that proposes always the same question (Sailor, what do you carry in your gray bag?), which is reinforced by a piano accompaniment and a solo sailor who responds. The pace is lively and paced like a dance where, willingly or unwillingly, the participants are forced to dance tirelessly on the deck of the ship plowing through the waves.As a completely different character is the “Song of the captain”, sung by the incomparable Gigi Proietti again, who describes a Captain Akab who is feared by his crew (male chorus that ends the song) that, at the same time, admires and respects him. This arrangement, which as usual uses the piano, the accordion and other instruments cited above, is much more refined with the entrance of the spinet. It is historically proven that this keyboard instrument with plucked strings could be present on sailing because of its modest size. Limited 500 copies.