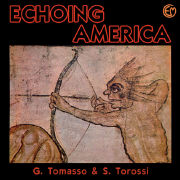 America, a Great Country, has always been synonymous of freedom: individual and collective freedom of thought, religions and expressions. The latest artistic expressions of the century, were born and developed in this great Nation, especially in the field of art, where have reached significant milestones. In the sixties / seventies, it is the music that takes mainly advantage from this great unknown freedom until then and the echo of these ideas came first in Europe and then in the rest of the world. Italy could not ignore this social and cultural revolution and all the Italian artists were involved in the application of these new ideas and musical cultures that still exist today. And at this point we must speak of two great Italian musicians of that time: the Maestro Stefano Torossi, composer, arranger and conductor, who, after studying classical double bass at the Conservatory of Rome and won a scholarship, from the ' 57 to '59 he moved to the United States at the Institute Williams College in Williamstown, Massachusetts and Brandeis University in Boston and Maestro Giovanni Tommaso, who began studying music with his double bass attending the Conservatory in the '50s and in the same time was interested in jazz, and later moved to Bologna to attend the Jam Session that was reference for this type of music, not only for city Emiliana, but also for Italy. These two great musicians in the 70s have made for Cometa Edizioni Musicali, a series of songs that have been identified perfectly with the new expressive music born in America in those years, and so it was that was released the LP ''ECHOING AMERICA '', an album that contained the most beautiful expressions of the revolutionary cultural music, born in America at that particular moment in history.The musical themes treated by these two masters, as well as they are superbly orchestrated and carried out, are perfectly relevant to the theme proposed by the individual songs: ''ECHOING AMERICA'' which reflects literally the words ''THIS IS AMERICA.'' So, musically, moving from a ''JUNGLE HARLEM'' or the urban jungle, where a dark and obsessive rhythm and a obstinate percussion overlapped with art, the lines emitted by an electric guitar and other instruments, in imitation of the sounds of horn and other sounds that are part of the way of life in the black neighborhood of New York, give a sophisticated song of country, ''DANCE TOMORROW'', a typical dance of the white population in the south area of the country. Or switch a very gritty rock that takes us along an imaginary journey through the streets and the endless straight Americans, coast to coast, entitled ''COAST TO COAST'' a typical song ''FAKE IT'' in which a nostalgic harmonica , accompanied by a banjo, reminiscent of the spectacular sunsets over the Grand Canyon .... and so on until the end of the CD, that with his music and our thoughts, lead us in all those hidden corners that are part of that vast country called America. Have a good trip!