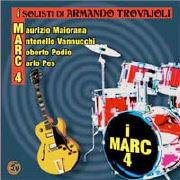 In view of the soundtracks a new speech can be opened for the band I MARC 4. Around 1950, four musicians who were part of the orchestra of RAI, decided to form a band and in the moment of the constitution, they had a brilliant idea: to find their definition using the initial letters of their names, so the beat band “the MARC 4” was born from that idea. The first two musicians of the group, keyboardist Maurizio Majorana and drummer Roberto Podio, already knew each other for having played together earlier, in performing jazz songs with Lucio Dalla. The third player Antonello Vannucchi came directly from jazz, having played with Giovanni and Vito Tommasi, in THE QUARTET OF LUCCA. The fourth musician Carlo Pes, jazz aficionado, had started his career as a guitarist with Enrico Simonetti and Bruno Martino. Created as a Study Group, in a short time I MARC 4 found themselves working with great soundtrack composers such as Ennio Morricone, Nino Rota, Armando Trovajoli, Gianni Ferrio, Piero Piccioni, Alessandro Alessandroni, Piero Umiliani, and many other great musicians of the time. Later, the group conceived and produced on its own a musical genre that started from the Beat, continued with the Bossa Nova to get to the Jazz, whose main feature was the Hammond organ played by Antonello Vannucchi. I MARC 4 are the sum of knowledge of various styles and musical instruments present at the time. Essential, compact and extremely clean, they used a wide range of musical instruments, even the ethnic ones, mixing them to classical electric instruments of the period, to the early synthesizers, even to baroque instruments with no trimming timbre, or daring sound experimentation, putting the instruments to compare in a continuous stylistic balance thus highlighting maximum of their expressive features. In the late sixties, this group of musicians was outside from other bands, for that set of movements, even very eccentric at that time particularly fruitful in Italy, that crafted musically many styles and novelties in the Western world. In Alex, for example, the set of instruments: Hammond organ, electric bass and drums, with a very fast pace support a funny, curious and close dialogue between a idiophone ethnic instrument that mimics a yelp of a dog, and a spinet, without a tone that prevails over the other. By Alex No. 2, the same song without melody, you can appreciate the clean and compact sound of the backing track. In this CD the music scene is varied, changing from a soft and delicate nocturnal blues, the song is John Blues, in which a quiet saxophone has an interview with an electric guitar, to a dark, haunting and rhythmic Mato Grosso, where the bass and drums are the carpet for an idiomatic instrument that mimics the verse of monkey. From an elegant and sophisticated Piramidi, which seems to describe an object of exclusive design, to a brutal rock (so to say, given the time) Piccadilly Circus that uses artfully distorted instruments which bring us to the purest sound. From a descriptive Trafalgar Square where a spinet puts us at the center of London to hear a typical classic sound to a To Pedal in which the rhythmic and the basso continuo push us towards a pure rock and roll. In these passages, still amazingly fresh, you feel an immense musical self-confidence and a wisdom of timbral combination at the same time extremely stylish and original. The four members of the group I MARC 4 have had an important career and even today their names, their music and their group, have and will still have for who knows how long, a great musical success.