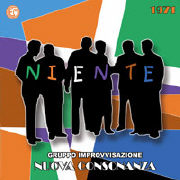 TRUMPET PLAYED by ENNIO MORRICONE Maestro Ennio Morricone joining the group of Nuova Consonanza, share with them in the creation of the music on this CD, which groups tracks performed with improvisation during a public performance. The love of Morricone for the trumpet is well known, and this instrument is his beloved among the other. In these tracks his genius is particularly noticeable from the amazing result: music very pleasant to the ear.

HISTORY OF THE ASSOCIATION NUOVA CONSONANZA Towards the end of 1959, a small group of young musicians from various parts of Italy, during their meeting, matured the idea of founding an association for the promotion and diffusion of contemporary music with the intent to modernize, what they thought the usual Italian music consumption. At that time the various groups dealing with concerts, certainly did not favor any alternative music, but the commonly used. So in 1960, in the cultural evironment of postwar Rome, the idea that at first came to mind of only a few people, and perhaps destined to die with nothing done, took shape and materialized into a group called NUOVA CONSONANZA (New Consonance) for the determination and efforts of Mario Bertoncini. The music critic Alberto Pironti, who was inspired by a seventeenth century foreword, and was also attending one of the many meetings of the Association, suggested the name. The members of the Association welcomed his proposal with excitement. The founding members were: Mario Bertoncini, Mauro Bartolotta, Antonio De Blasio Franco Evangelisti, Domenico Guaccero, Egisto Macchi, Daniele Paris. Later on Ennio Morricone also actively participated with the group in their concerts. Perhaps, by joining the group of musicians, he was realizing his secret dream: to abandon the cliche' of following the written notes on the staff of a pre-developed theme, and give free rein to improvisation, and free rein to his musical feelings. The music performed with the technique of the NUOVA CONSONANZA, using improvisation, is not an easy job. The music creation process needs a set of rules and encoded linguistic processes rather complex, and a lot of technical skill, expressivity and great mastery. The history of improvisation is a very important aspect of the music tradition traceable only in the high-level music of our western culture. With its set of artistic and commonly used processes, with its openess to development and the idea of change, extended to the variation of the form of music itself, it is closely linked to practical performances, which is based on an impartial and open temperament. NUOVA CONSONANZA, through its activities (performances, lectures, debates, etc.), aims at promoting a more live acquintance with contemporary music, and be an imagination stimulus to affect the wide public taste for music. ENNIO MORRICONE plays the trumpet In the execution of these music, more intensely than in other music of the same gender, Ennio Morricone through his trumpet transmits a sense of pleasure and vibrant emotions typical of his unmistakable and prominent style. Among the founding members of the NUOVA CONSONANZA Association, there is Daniele Paris, of whom Maestro Ennio Morricone was a great admirer. Morricone was awarded with the Premio Internazionale Daniele Paris (International Award Daniele Paris) in its first edition. On the occasion he said: To show his friendship and esteem for Daniele, Maestro Ennio Morricone dedicated to the Award first edition a concert, and he himself directed the Orchestra. -Ennio Morricone.