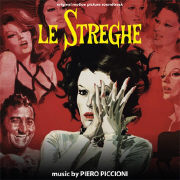 Digitmovies is proud to present on CD the complete OST in mono and in full stereo by Piero Piccioni for the episodes “The Witch Scorched Alive” by Luchino Visconti and “A Night Like Any Other” by Vittorio De Sica for the 1967 movie “Le streghe” (aka “The Witches” - Les sorcieres) produced by Dino de Laurentiis.

The film, which was released on 22 February 1967, is divided into five episodes starring the fascinating Diva Silvana Mangano. “La strega bruciata viva” (“The Witch Scorched Alive”) directed by Luchino Visconti (1st episode): One winter evening Gloria (Mangano), a famous actress, arrives in an Austrian town to spend the evening together with some friends, who turn out to be not the good friends they were supposed to be : By taking advantage of her sudden illness they remove her make-up and look pleased at the small imperfections of the diva. After she has discovered to be pregnant and has a fight over the phone with her husband, the woman leaves again more disturbed than the day before, but hidden and splendid as a true diva for photographers. “Senso civico” (“Citizenship”) directed by Mauro Bolognini (2nd episode): A rich lady (Mangano) takes in her car a wounded driver (Alberto Sordi), but is only concerned not to be late with an appointment. “La terra vista dalla luna” (“The Earth Viewed from the Moon”) directed by Pier Paolo Pasolini (3rd episode): Ciancicato Miao (Toto), accompanied by his son Basciu (Ninetto Davoli), is looking for a nice woman to marry her. The man meets a beautiful deaf-mute girl with green hair who gets into their cabin and transforms it into a lovely home. A miracle! One day Assurdina (Silvana Mangano) dies in an accident, but she comes back under the guise of a ghost to meet the two poor ones and continues to help them in this way. The moral: to be alive or to be dead is just the same thing. “La siciliana” (“The female Sicilian”) directed by Franco Rossi (4th episode): The proud Nunzia (Mangano) causes a feud. “Una sera come le altre” (“A night like any other”) directed by Vittorio De Sica (5th episode): Giovanna (Mangano), a wife neglected by her husband (Clint Eastwood), dreams to make love in a stadium whilst being applauded by a crowd of men only. Five characters of women all embodied by the ethereal beauty of Silvana Mangano, the absolute diva of this film who is in a constant balance between the sacred and the profane, between hell and heaven. The Bolognini and Rossi episodes have virtually no music - except very brief fragments of atonal strings (possibly library music) in the Rossi episode and just a reprise of the “main theme” written by Piero Piccioni for the Visconti episode at the end of the Bolognini episode (an excerpt from the movie’s opening titles).The Pasolini episode was scored by Ennio Morricone (“Mandolinata” appeared on side A of the original Italian 45 rpm single on the United Artists label UA 3113) and subsequently on some compilation, whereas the Visconti and De Sica episodes were entirely scored by Piero Piccioni (the “Cha-cha beat” theme from the De Sica episode was issued on side B of the original Italian 45 rpm single on the United Artists label UA 3113) and a suite from the Visconti episode was later re-recorded by the author for a Japanese anthology devoted to the music for the cinema of Luchino Visconti. This CD (with a total duration close to 63 minutes) focuses only on the music of Piero Piccioni for this film. The tapes were kept in the private archives of M ° Piccioni and they have been found with the big help of Jason Piccioni, the son of the composer. Two ? reel tapes, one in stereo and one in mono, which have been preserved until today in very good conditions, have really given us the chance to realize this - until today impossible - record dream. For “The Witch Scorched Alive” Piero Piccioni has written a refined dance floor theme, a shake for piano, organ, drums, guitars and brass, which we might call “The witches shake”, reprised with different instrumentations (Tr.1,Tr.3,Tr.5,Tr.Tr.9, Tr.11, Tr.13, Tr.16), and which is the background dance of Gloria in the hotel lounge room, admired by her envious friends who surround her. This dance floor music (much searched and loved by Film Music fans around the world) is alternated with a romantic, rarefied and haunting love theme that, without doubt, is one of the most beautiful love themes of the whole career of Piero Piccioni: a jazzy, slow, suspended, almost sacred theme for harp, vibraphone, guitar, celesta, flute and bass (Tr.4, Tr.6, Tr.8, Tr.10, Tr.12, Tr.14, Tr.15). As bonus tracks at the end of this CD we include, for historical and artistic purposes, the very rare mono version of the shake theme as featured in the opening titles (tr.31) - with some sound effect found in the mono master tape of the final film music/effects mix (sadly a mix without effects did not survive at all) - and a long stereo suite (tr.32) re-recorded by M ° Piccioni which is based on the shake theme and variations of the magical love theme. For the Vittorio De Sica episode starring Silvana Mangano and Clint Eastwood Piero Piccioni has written a very romantic waltz-like love theme in Tr.17,Tr.19,Tr.24,Tr.30 alternated with burlesque American-flavoured marches (Tr.21,Tr.23,Tr.25,Tr.26,Tr.29). Also dance floor music of those days is featured like “Cha-cha beat” - both in the short original single version (Tr.18) and in the long take (Tr.28) - and lovely shake music with female choir (Tr.20). The CD does also contain source music tracks like lounge music for piano solo (Tr.2), a piano solo reprise (Tr.7) of the famous Italian hit “Il mondo” by Jimmy Fontana and Gianni Meccia, “Chariot”, a big hit of Petula Clark (written by Frank Pourcel and Paul Mauriat) aka “I Will Follow Him” in the stereo mix version with choir and orchestra (Tr.22) and its instrumental version in mono (Tr.27), both of which arranged by Piccioni himself. The score is brilliantly conducted by Bruno Nicolai and Piero Piccioni himself. Please note also that in this OST and almost in all his soundtracks, M ° Piccioni performs solo piano and organ.
-- from the label.