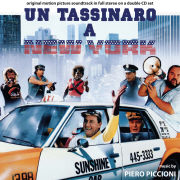 Piero Piccioni (Turin, December 6, 1921 - Rome, July 23, 2004) was the author of hundreds of soundtracks for cinema and television. He composed the lovely music for ''A Taxi Driver in New York'', followed by ''The Taxi-Driver'' in 1983. At that time Cinevox Records had released an LP (MDF 33/182) containing twelve tracks selected by the author (35:29 minutes). In addition releasing this soundtrack for the first time on CD, we were also able to access the original recording session where we discovered an additional 64 minutes of previously unreleased music (movie versions and alternate takes) that give this sparkling OST almost nearly 100 minutes of material in stereo. Stylish romantic and nostalgic music alternates with passionate jazz pieces, blues and funk in pure Piccioni style. For listening purposes only, the composer also included original pieces from other films such as ''The Seduction of Mimi'' and ''Strange Occasion.''

PLOT:
One night a taxi driver in Rome, Pietro Marchetti, witnesses the murder of a prominent businessman who had just got out of his cab. This man happened to be the only witness to a mafia crime. The killer immediately follows Pietro in his car, but luckily he is able to lose him and decides to say nothing of what had happened to anyone. The next day begins as previously planned- a trip to New York with his wife Teresa to visit their son Francesco who is about to graduate in the US. But then Pietro is surprised when he is arrested by the police. It seems they just want to protect him from the mob who are determined to kill him but in reality, The Italian-American cop Favretto wants to use him as bait to trap the mobsters. Favretto tells Pietro his plan and promises to find a good job for his son, so Pietro accepts the risk. Pietro is not allowed to return to Rome for some time and instead he is given a false name and begins working as a taxi driver in New York.

SOUNDTRACK:
We are pleased to release for the first time ever the OST by the late Manuel De Sica (for whom we have already released the OSTs from ''The Crimes of the Black Cat” (original title “Sette scialli di seta gialla'') and ''Cemetery Man'' (original title “Dellamorte Dellamore”). Maestro De Sica gave us his consent to include his short OST from ''A Blast of Life'' (aka “Una botta di vita”) with that of Maestro Piccioni. We also discovered that various themes from “A Taxi Driver in New York” were re-used to the recording, which makes this pairing just perfect. We have used every note originally recorded in stereo (about 34:19 minutes) from this very elegant single-issue soundtrack. A recurring main score in samba emerges that is reprised in slower versions using different instruments. This double CD is for the fans of Alberto Sordi , Piero Piccioni and Manuel De Sica, with a total time of 133:55 minutes.

PLOT:
Elvio Battistini, an old man from Rome with a wooden leg, lives in a village in Emilia with his daughter, son-in-law and grandchildren. On the eve of the August 15th summer holiday his family leaves for Greece and leaves him alone. Giuseppe Mondardini is his well-known friend and is just a bit more sprightly than Elvio. Together the two men decide to paint the town red and take off in Giuseppe’s car for Bordighera. Along the way they pick up Camilla, a young, carefree girl. While Elvio is sleeping, Giuseppe decides to head to Saint Tropez instead. After some bickering, the two smoke a joint Camilla has offered them and they fall asleep on the beach. They wake up in the middle of a nudist colony and meet Germaine, a woman who had lost everything the night before at the casino. Elvio gets drunk and slips into the elevator and then into Germaine’s room. He brags about his love exploits, but in reality the alcohol just made him sleep like a log. After a fight, Elvio and Giuseppe go their separate ways. To get back home Elvio gets on a bus full of German tourists, but along the Aurelia road there is a terrible traffic jam due to a car accident involving Giuseppe (luckily not serious). Elvio is very worried and accompanies him in the ambulance since by now he has grown quite fond of his crafty, extravagant friend. -- from the label.