BRAVEHEART: THE FILM MUSIC OF JAMES HORNER FOR SOLO PIANO 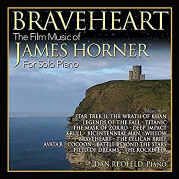 BuySoundtrax Records is pleased to announce the release of BRAVEHEART: THE FILM MUSIC OF JAMES HORNER FOR SOLO PIANO, a compilation of newly produced recordings celebrating the work of one of the modern giants of film music.

With this collection, begun prior to the composer’s untimely death, classically trained concert pianist and composer/orchestrator/conductor Dan Redfeld has adapted fifteen of James Horner’s finest film themes or suites into the purity of solo piano performance. By distilling the orchestral power of these compositions into the expressive intimacy of the grand piano, the clarity of Horner’s abilities as a melodist and musical craftsman can be strikingly recognized. Redfeld has adapted these reductions from published piano arrangements, studying of the original full scores and, where necessary, his own transcription of the music from the movie or the soundtrack album itself. “For me, James Horner was one of the great musical voices of the last twenty or thirty years of film music,” said Redfeld. “I hope in time he’s remembered at the level of Rozsa or Williams or Goldsmith, because I feel he was equally as talented and his contribution to music equally as important.”

Dan Redfeld is a classically trained concert pianist and composer/conductor who studied at Boston’s New England Conservatory. While many of his fellow students were embracing modernistic, atonal music, Redfeld was more interested in tonal, neo-romantic music, an inclination grounded by his studies with acclaimed composer and pianist William Thomas McKinley. At the same time, Redfeld had discovered a love for film music through the work of John Williams in JAWS and STAR WARS. Through McKinley, Redfeld met and watched Williams at work with the Boston Pops, and the famous film composer’s influence settled into his artistic design. Redfeld began scoring short films for the American Film Institute, and in a day when many film composers were coming out of popular music into Hollywood film scoring careers, he found his academic background particularly advantageous to the music he was writing.

With this new album, Redfeld hopes to uncover the talent and craftsmanship of James Horner as revealed by the reinterpretation of his orchestral film music into the simplified, organic medium of the concert piano, and that listeners can thus gain new insight into the composer’s craft. “Doing albums like this has been a great learning experience for me to examine the work of composers whose skill I’ve respected and whose music I’ve loved,” he said. “For me, it’s about how I can honor James’s music in a way where you can still see the structural integrity of his music, even when reduced in form to be played on a piano.

BRAVEHEART: THE FILM MUSIC OF JAMES HORNER FOR SOLO PIANO is an excellent overview of James Horner’s career and includes music from STAR TREK II: THE WRATH OF KHAN, LEGENDS OF THE FALL, TITANIC, THE MASK OF ZORRO, DEEP IMPACT, KRULL, BICENTENNIAL MAN, WILLOW, THE PELICAN BRIEF, AVATAR, COCOON, BATTLE BEYOND THE STARS, FIELD OF DREAMS, THE ROCKETEER and BRAVEHEART. The album contains liner notes written by author Randall Larson providing insight into the history of the music and the composer with insight from Dan Redfeld into the creation of these new performances.