DOCTOR WHO: A MUSICAL ADVENTURE THROUGH SPACE AND TIME, Volume One 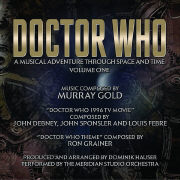 BSX Records is pleased to announce the release of DOCTOR WHO: A MUSICAL ADVENTURE THROUGH SPACE AND TIME, VOLUME ONE, a compilation of newly produced recordings that takes a musical journey through space and time by revisiting the music of DOCTOR WHO, focusing on Murray Gold’s primary themes and songs from the new BBC series’ first eight seasons - from the 9th Doctor through the introduction of the 11th, plus a trio of bonus tracks from the 1996 TV-movie that introduced the 8th Doctor, composed by John Debney, John Sponsler and Louis Febre. Composer Dominik Hauser has accurately transcribed the music from its original form in order to present as closely as possible an authentic rendering of the original themes.

Using a small acoustic ensemble of a dozen strings (eight violins, four violas), which were electronically tripled to make them sound like 36, plus live brass, woodwinds, guitar, electric bass, and an underlying layer of synthesizers and samplers, Hauser with set out to create a ‘Best Of’ album of music from DOCTOR WHO, picking what he felt were the most important cues from the first eight season’s cues, and the TV movie. “Because I watch the show, it was really fun taking the pieces that I already knew and picking them apart to see what makes them tick,” Hauser said. “I loved doing all the character themes, because they are meaningful, being so closely associated with characters I’ve been watching on the show for so long.”

Originally from Switzerland, Dominik Hauser received his education at the Jazz School St. Gallen in Switzerland, earning a masters degree in music. In 1996 Hauser relocated to Los Angeles, to attend UCLA where he delved deeply into film scoring. Subsequently he took his skills to the realm of indie cinema and began composing for film. Hauser’s work involves him in a variety of projects, including cinema, theater and video games. Recently Hauser completed arranging and orchestration on the restoration of the first Best Picture Academy AwardR winner WINGS for the 2012 Paramount Picture centennial celebration. His work for the record label BSX includes THE BOUNTY, SCROOGE and THE STRANGE CASE OF DR. JEKYLL AND MR. HYDE. Hauser recently published his fourth book, SOLOING FOR BASS.

Produced and arranged by composer Dominik Hauser, performed by the Meridian Studio Orchestra, DOCTOR WHO: A MUSICAL ADVENTURE THROUGH SPACE AND TIME, VOLUME ONE includes liner notes written by author Randall Larson providing insight into the history of the music of DOCTOR WHO and the selections chosen to be recorded for this release.

DOCTOR WHO: A MUSICAL ADVENTURE THROUGH SPACE AND TIME, VOLUME ONE is a limited edition release