UP / RATATOUILLE / THE INCREDIBLES, Music from the Pixar Films for Solo Piano 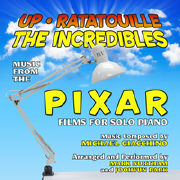 uySoundtrax Records is pleased to announce the release of MUSIC FROM THE PIXAR FILMS FOR SOLO PIANO, featuring music composed by Michael Giacchino for the beloved Pixar films UP, RATATOUILLE and THE INCREDIBLES arranged for solo piano.

MUSIC FROM THE PIXAR FILMS FOR SOLO PIANO focuses on music composed by
Michael Giacchino for the Pixar films UP, RATATOUILLE and THE INCREDIBLES. These suites of piano and keyboard arrangements from Giacchino’s Pixar scores, arranged and performed by Mark Northam and Joohyun Park, demonstrate that while Giacchino is a master of orchestration, his melodies can be reduced to their purest form without losing an ounce of their power. Throughout the project, Northam and Park focused on trying to get the feel and emotion of each track realized on solo piano in a way that most complemented the music without going beyond the bounds of the solo piano’s effective range.

Michael Giacchino was born in October, 1967 and grew up in Edgewater Park Township, New Jersey. He attended the Evening Division at the Juilliard School as well as the School of Visual Arts in New York City, where he acquired a degree in film production and a minor degree in History. Giacchino's first major composition was for the DreamWorks video game adaptation of THE LOST WORLD: JURASSIC PARK. The video game was the first PlayStation and Sega Saturn console title to be recorded with an live orchestral score. Giacchino’s work on various video games, including the popular MEDALOF HONOR and CALL OF DUTY franchises, led to his first work on television. In 2001, J.J. Abrams, producer of the television series ALIAS, discovered Giacchino through his work on the video games and tapped Giacchino to provide the new show's soundtrack. Giacchino would also provide the score for J.J. Abrams's project, the 2004 television series, LOST. In 2004, Giacchino was given his first big feature film composition when he was called on to provide the soundtrack for the Pixar film, THE INCREDIBLES. Director Brad Bird had heard Giacchino's work on ALIAS and asked him to work on the soundtrack for THE INCREDIBLES.

In addition to his long list of soundtracks, which includes music for films such as SKY HIGH, MISSION IMPOSSIBLE III, SPEED RACER, STAR TREK, LET ME IN, SUPER 8, JOHN CARTER, STAR TREK INTO DARKNESS, DAWN OF THE PLANET OF THE APES, JUPITER ASCENDING and the forthcoming JURASSIC WORLD, Giacchino has continued his collaboration with director Brad Bird on films suchs as RATATOUILLE, MISSION IMPOSSIBLE: GHOST PROTOCOL and the forthcoming TOMORROWLAND. Following his success in television with ALIAS and LOST, Giacchino has continued to compose music for shows such as ALCATRAZ and FRINGE.

A graduate of the UCLA Extension Film Scoring program, Mark Northam is the founder of The Film Music Network, one of the industry's largest trade associations, and is publisher of Film Music Magazine, a leading industry trade publication for the film, television, and multimedia music industry. He has written and taught extensively about the film and television music business while working for a time as a film composer. He continues to write about film music and still regards his piano work as the fundamental part of his musicianship and musical interests.

Born in South Korea, Joohyun Park began studying music at the age of six at the prompting of her mother. Eventually she received both a Bachelor’s and a Master’s Degree of Piano from Yon Sei University in Seoul, studying with pianist Myoungwon Shin, before relocating to the United States, where she earned a Bachelor’s Degree in Contemporary Writing and Production from Boston’s famed Berklee College of Music. Joohyun's orchestrations and arrangements can be found in PRIEST, DRAG ME TO HELL, CREATION, WHEN IN ROME, LOVE HAPPENS and many other films.