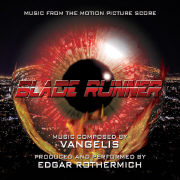 BUYSOUNDTRAX Records presents BLADE RUNNER: MUSIC FROM THE MOTION PICTURE SCORE, a re-release of our new recording of the classic score composed by Vangelis (CHARIOTS OF FIRE, THE BOUNTY, 1492, ALEXANDER), produced and performed by composer Edgar Rothermich. Previously released on Buysoundtrax.com as a 30th anniversary commemorative, our newest incarnation has been further re-mastered with new cover art.

Released in 1982, the dystopian BLADE RUNNER was directed by Ridley Scott (THE DUELLISTS, ALIEN) and featured Harrison Ford in his second starring role after RAIDERS OF THE LOST ARK. Celebrating its 30th Anniversary in 2012,BLADE RUNNER has become a cult film favorite the world over. Loosely based on a 1968 Philip K. Dick novel, Ford starred as Rick Deckard, a former police officer reluctantly assigned to terminate four replicants who have come to Earth to find their maker. The cast also included Sean Young, Rutger Hauer, Daryll Hannah, Brion James, Joanna Cassidy, James Hong, William Sanderson, Joe Turkel and M. Emmett Walsh.
Over the years, multiple edits of the film have been created for the home video,DVD and Blu-Ray markets. Similarly Vangelis’ score has been released in several different incarnations, but none of them are accurate representations of what was heard in the original 1982 film. “Largely because of a dispute between Vangelis and Scott over the director’s use of his music in the film, a proper soundtrack of the music as it is heard in the film has never been commercially issued (despite the promise of a soundtrack album from Polydor Records given in the film's end titles),” described Randall D. Larson in the liner notes of the new recording.

BSXdigitalmusic.com seeks to correct this oversight, with a new recording faithfully recreating the original music from the film, which proved to be a difficult task. Vangelis’ score was composed entirely by performing on keyboards and recording it directly, so no written transcriptions exist. Composer Edgar Rothermich was charged with reverse engineering the score - listening to the original music and a 1982 album mock-up and transcribing it by ear. He also had to recreate the sound of 1982 synthesizers and decipher if noise heard was due to recording on tape or stylistic choices by the composer.
“BLADE RUNNER is the most difficult kind of score to deconstruct,” said BSXproducer Ford A. Thaxton. “Symphonic music can usually be determined because the instrumental palette is known. But the 1970s-era electronic technology and the improvisational style in which Vangelis created the score made it especially difficult. But we feel Edgar’s made a very close replication of what the score sounded like in the film. He’s true to the sound the original but he’s brought it into today’s world.”

“The objective from the very beginning was to be as close as possible to the original score as heard in the film,” Rothermich said. “It was never a case of my interpreting the soundtrack. It was essentially a re-recording of the soundtrack music.”

Born in Germany, Edgar Rothermich studied music at the University of Arts in Berlin and graduated in 1989 with a Master's Degree in piano and sound engineering. He worked as a composer and music producer in Berlin and moved to Los Angeles in 1991 where he continued his work on numerous projects in the music and film industry (THE CELESTINE PROPHECY, THE OUTER LIMITS, BABYLON 5,WHAT THE BLEEP DO WE KNOW, FUEL, BIG MONEY RUSTLAS).

For the past 20 years, Edgar has had a successful musical partnership with electronic music pioneer and founding Tangerine Dream member Christopher Franke. Recently, in addition to his collaboration with Christopher, Edgar has been working with other artists as well as on his own projects. December 2010 marked the release of his first two solo albums, ‘Why Not Electronica’ and ‘Why Not Electronica Again’ followed by ‘Why Not Solo Piano’, released in 2011.

BLADE RUNNER: MUSIC FROM THE MOTION PICTURE SCORE has been mastered by James Nelson at Digital Outland and includes exclusive liner notes written by Randall Larson, detailing the process of creating this new recording.