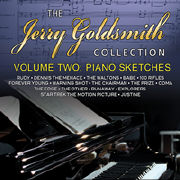 BuySoundtrax Records is proud to announce the release of THE JERRY GOLDSMITH COLLECTION - VOLUME 2: PIANO SKETCHES, the second release in their series of new recordings of classics from the composer’s extensive filmography, newly interpreted for solo piano.

With THE JERRY GOLDSMITH COLLECTION - VOLUME 2: PIANO SKETCHES, BuySoundtrax Records presents the music of one of Hollywood’s finest musical practitioners translated into the intimate medium of solo piano, arranged and performed by a trio of expert pianists: Dan Redfeld, Joohyun Park, and Mark Northam. Each of these players comes from a somewhat different background and brings a unique style to the keyboard, yet all share a profound respect for the composer which is evident in their respectful transliteration of his music onto the piano. As author Randall Larson describes in his liner notes, “Distilling Goldsmith’s often thunderous film music into such a focused medium as solo piano is a challenging undertaking, until one remembers that Goldsmith himself was a pianist and performed piano solos on several of his own scores.”

The tracks presented on THE JERRY GOLDSMITH COLLECTION - VOLUME 2: PIANO SKETCHES are culled from nearly every genre Goldsmith worked. The album represents four decades worth of Goldsmith’s film music spread over thirty years, from 1963’s THE PRIZE to 1993’s RUDY, with music ranging from the sublime melodic beauty of love themes from exotic period drama JUSTINE, medical sci-fi thriller COMA, sci-fi romance drama FOREVER YOUNG, and sports-oriented TV-movie BABE to more aggressive performances from the cop thriller WARNING SHOT and the wistful Americana flavoring of TV’s THE WALTONS. “The objective of this project was to remind people that Jerry was always a tunesmith,” said album producer Ford A. Thaxton. “He could always write a really great tune. He’s not known as much for that - it’s his great orchestrations and exotic textures that he is most often recognized for, but when it came down to writing a tune, Jerry had a great gift. Hearing them from the austerity of a solo piano performance really allows their melodic brilliance to come out.”

Jerry Goldsmith was born in 1929 and as a child studied piano, composition and theory. After a stint taking classes in film composition taught by Miklos Rozsa at USC, he attended Los Angeles College. In 1950, Goldsmith was hired by CBS as a clerk typist for the music department. It was at CBS that he would get his start writing music for several television series. In the early 1960s, Goldsmith moved more into the feature film realm, earning widespread acclaim for his score for the western LONELY ARE THE BRAVE and his first Academy Award nomination in 1962 with FREUD. Throughout his long career, Goldsmith would be nominated 17 more times, for A PATCH OF BLUE, THE SAND PEBBLES, PLANET OF THE APES, PATTON, PAPILLON, CHINATOWN, THE WIND AND THE LION, THE OMEN (nominated for original song and earning the award for Original Score), THE BOYS FROM BRAZIL, STAR TREK: THE MOTION PICTURE, POLTERGEIST, UNDER FIRE, HOOSIERS, BASIC INSTINCT, L.A. CONFIDENTIAL and MULAN. He would also earn 5 Emmy Awards, for THE RED PONY, QB VII, BABE, MASADA and STAR TREK: VOYAGER. His credits also include beloved films and cult classics such as GREMLINS, RUDY, THE SECRET OF NIMH, FIRST BLOOD, TOTAL RECALL, BASIC INSTINCT, THE MUMMY, LOGAN'S RUN, THE GREAT TRAIN ROBBERY and ALIEN.

Dan Redfeld is a classically trained concert pianist and composer/conductor who studied at Boston’s New England Conservatory. While many of his fellow students were embracing modernistic, atonal music, Redfeld was more interested in tonal, neo-romantic music, an inclination grounded by his studies with acclaimed composer and pianist William Thomas McKinley. At the same time, Redfeld had discovered a love for film music through the work of John Williams in JAWS and STAR WARS. Through McKinley, Redfeld met and watched Williams at work with the Boston Pops, and the famous film composer’s influence settled into his artistic design. Redfeld began scoring short films for the American Film Institute, and in a day when many film composers were coming out of popular music into Hollywood film scoring careers, he found his academic background particularly advantageous to the music he was writing.

Born in South Korea, Joohyun Park began studying music at the age of six at the prompting of her mother. Eventually she received both a Bachelor’s and a Master’s Degree of Piano from Yon Sei University in Seoul, studying with pianist Myoungwon Shin, before relocating to the United States, where she earned a Bachelor’s Degree in Contemporary Writing and Production from Boston’s famed Berklee College of Music. Joohyun's orchestrations and arrangements can be found in PRIEST, DRAG ME TO HELL, CREATION, WHEN IN ROME, LOVE HAPPENS and many other films.

A graduate of the UCLA Extension Film Scoring program, Mark Northam is the founder of The Film Music Network, one of the industry's largest trade associations, and is publisher of Film Music Magazine, a leading industry trade publication for the film, television, and multimedia music industry. He has written and taught extensively about the film and television music business while working for a time as a film composer. He continues to write about film music and still regards his piano work as the fundamental part of his musicianship and musical interests.