THE WEDDING DATE: The Reception Edition 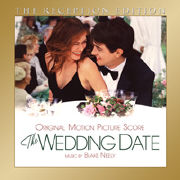 BUYSOUNDTRAX Records announces a new presentation of THE WEDDING DATE: THE RECEPTION EDITION, featuring music composed by Blake Neely for the 2005 romantic comedy directed by Clare Kilner, written by Dana Fox, based on a book by Elizabeth Young, starring Debra Messing (WLL & GRACE), Dermot Mulroney, Amy Adams, Jack Davenport, Sarah Parish, Jeremy Sheffield, Peter Egan and Holland Taylor.
Based on the novel ASKING FOR TROUBLE by Elizabeth Young, THE WEDDING DATE tells the story of Kat Ellis (Messing), who returns to her parents’ London home for her sister Amy’s wedding. Afraid of confronting her ex-fiance who dumped her two years earlier, she hires Nick (Mulroney), a male escort, to pose as her new boyfriend during the wedding festivities.
THE WEDDING DATE was Blake Neely’s first solo feature film assignment as composer. Previously released on compact disc at the time of the film’s release as a limited edition which swiftly sold out, the film’s musical score has remained popular in the public eye , considering how often composer Blake Neely has received requests for its return over the years. Expertly performed by the acclaimed Northwest Sinfonia Orchestra, the score finds the perfect pitch between laughs and love, mixing a frothy musical concoction in the vein of Georges Delerue for this delightful romantic comedy. THE WEDDING DATE’s main theme is a thoroughly engaging piece of music with a great melodic hook, and it grows and develops as Kat and Nick realize their affection for one another.
Blake Neely is an award-winning film and television composer. His recent scoring credits include the CW’s ARROW, USA Network’s POLITICAL ANIMALS, CBS’ THE MENTALIST and CBS’ new series GOLDEN BOY. Among his numerous accolades are multiple film and TV music Awards, a Gold Spirit Award, and three Emmy nominations for the WB’s EVERWOOD, ABC’s PAN AM and the HBO mini-series THE PACIFIC. Neely's composing credits include the television series BROTHERS & SISTERS, NO ORDINARY FAMILY, EASTWICK and ELI STONE. His feature film credits include LIFE AS WE KNOW IT, THE GREAT BUCK HOWARD, THE WEDDING DATE, ELVIS & ANNABELLE, STARTER FOR TEN and FIRST DAUGHTER. He has also composed additional music for films including KING KONG, SOMETHING’S GOTTA GIVE, THE DA VINCI CODE, THE LAST SAMURAI and the PIRATES OF THE CARIBBEAN films. Neely has worked with such masters as Michael Kamen, Hans Zimmer, James Newton Howard, and Vangelis. He has been a featured lecturer on film music technology at the Sundance Institute, University of Southern California, Columbia College and Hollywood Music Workshop Vienna. He has led orchestras around the world, most recently serving as Musical Director and honored guest of the International Film Music Festival in Cordoba, Spain.
THE WEDDING DATE returns to compact disc with this RECEPTION EDITION from BUYSOUNDTRAX Records, expanding the previous recording with three previously unreleased tracks that were not used in the film and two of the composer’s demo recordings that were submitted to the film’s producers in the early stage of finding the right musical tone for the movie. In addition, we have added new recordings of three of the songs that appeared on the soundtrack - “Breathless,” a 2000 hit for Irish pop group The Coors (heard during the second-half of the main titles, as Kat races to the airport), Michael Buble’s 2005 hit “Home” (heard during the end titles), and the 1963 Chiffon’s hit, “One Fine Day,” written by husband-and-wife songwriting team, Gerry Goffin and Carole King (played during the baseball game scene). These new versions have been arranged and produced by noted multimedia composer, orchestrator and arranger, Dominik Hauser.

THE WEDDING DATE: THE RECEPTION EDITION is a limited edition release of 1000 units.

Tracks 1-23 published by Cow On The Wall Music (ASCAP)
* - Different from version heard in film.