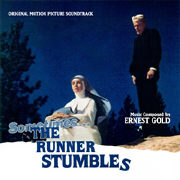 BUYSOUNDTRAX Records will be releasing the soundtrack for THE RUNNER STUMBLES for the first time, featuring music composed by Ernest Gold (EXODUS, TOM HORN, WALLENBERG: A HERO’S STORY) for the 1979 dramatic film directed by the great Stanley Kramer (ON THE BEACH, JUDGEMENT AT NUREMBERG, IT’S A MAD, MAD, MAD, MAD WORLD), based on the play written by Milan Stitt and starring Dick Van Dyke, Kathleen Quinlan, Maureen Stapleton, Ray Bolger, Tammy Grimes, Beau Bridges and Allen Nause.
Based on Milan Stitt’s 1976 Broadway play, which was in turn based on an actual 1919 murder trial, THE RUNNER STUMBLES features comedian Dick van Dyke, in his second dramatic role as Father Rivard, a priest of a Roman Catholic parish in rural Solona, Michigan who, as the movie begins, is jailed for the murder of Sister Rita (Quinlan), a young nun who arrived recently to help run the parish’s school. Rivard and Sister Rita are drawn together in friendship and, against their own better judgment, eventually fall in love. This conflict between their vows and between Father Rivard and his diocese Monsignor Nicholson (Bolger), not to mention Rita’s murder and Rivard being charged for the crime, form the crux of the story. Maureen Stapleton plays Rivard’s housekeeper and cook Mrs. Shandig, whose own feelings for Rivera are kept well suppressed until she overhears Rita’s declaration of love to the priest.
Gold’s music for THE RUNNER STUMBLES is as earnest as the lead characters’ compulsion toward doing what is proper, and as passionate as their refusal to deny their feelings for one another. The main theme is treated with sublime elegance and orchestral poignancy. A second recurring theme is the tune introduced in “My Rumble Seat Gal,” an authentic-sounding early 20th Century Dixieland-styled song written by Gold with lyrics by Jeanette Keller. As Rivard and Rita’s attempts to keep their feelings in check and their behavior proper, the tone of the music turns darker.
THE RUNNER STUMBLES was Ernest Gold’s last really great dramatic feature film score. Significantly, working with producer/director Stanley Kramer for one last time let Gold return full circle to the kind of music he felt best at. Film composer Ernest Gold (1921-1999) maintained a close working relationship with Stanley Kramer throughout his career in Hollywood. Of the more than eighty film and television credits to feature his music, eleven of them were directed by Kramer. The director gave him his biggest opportunities in film music and he composed most of Kramer’s biggest films as director.
Ernest Gold came to the United States from Vienna in 1938, prompted by Hitler’s invasion of Austria, and started working as a piano accompanist and as a popular songwriter in New York City. Growing disillusioned by songwriting, Gold headed west in 1945, following an interest in writing music for Hollywood films. Within two weeks of his arrival in early July, Gold was quickly put to work scoring THE GIRL OF THE LIMBERLOST for Columbia Pictures. He would score forty B-movies of all types for numerous studios through the late 1950s for a variety of studios. Gold never lost track of his Viennese musical heritage and contributed first-rate musical scores to dozens of films big and small.
He began studying with composer George Antheil in 1947, early in his Hollywood career. During the 1950s he began orchestrating Antheil’s scores, and when Antheil began scoring Stanley Kramer’s pictures, Gold came along with him. When Antheil died before finishing the score for Kramer’s next film, the post-apocalypse drama, ON THE BEACH (1959), Gold assumed his role as Kramer’s primary composer, scoring such films as INHERIT THE WIND (1960), JUDGMENT AT NUREMBERG (1961), and Kramer’s blockbuster comedy, IT’S A MAD, MAD, MAD, MAD WORLD (1963). Meanwhile, his association with Kramer led to other A-list movies, including Otto Preminger’s EXODUS (for which Gold won an Academy Award for best score and two Grammys for best soundtrack album and best song) and Sam Peckinpah’s war movie CROSS OF IRON (1977). Gold's contributions were recognized with four Academy Award nominations and three Golden Globe nominations. His work for ON THE BEACH also won Gold a Grammy Award. The Hollywood Walk of Fame has also recognized him with a star on the famed Hollywood Boulevard. Gold composed the music for the 1968 Broadway musical I’M SOLOMON. His classical works also included a piano concerto, a string quartet, and a piano sonata.
BUYSOUNDTRAX Records presents the world premiere soundtrack release of THE RUNNER STUMBLES, with mastering by James Nelson at Digital Outland. The booklet includes liner notes by author Randall Larson, including insights from composer Ernest Gold himself, taken from an interview with the composer conducted by Larson towards the end of his career.

THE RUNNER STUMBLES is a limited edition release of 1500 units.