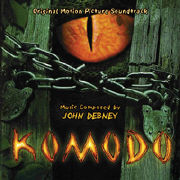 BUYSOUNDTRAX Records presents the original soundtrack to KOMODO, featuring music composed by John Debney for the 1999 horror/thriller directed by Michael Lantieri, written by Hans Bauer and Craig Mitchell and starring Jill Hennessy (CROSSING JORDAN), Billy Burke (REVOLUTION, TWILIGHT) and Kevin Zegers.
Set on Emerald Island, off the coast of North Carolina, the film begins with the careless discarding of crates of komodo dragon eggs during stormy weather. Over the span of eighteen years, the lizards grow to very large proportions and begin hunting larger prey as their hunger grows and smaller prey becomes scarce. KOMODO tells the story of Patrick Connally, a troubled teenager who witnesses his parents being devoured by komodo dragons in his home on Emerald Island. Rescued and sent to the mainland for treatment of his trauma, he is put in the care of Victoria (Hennessy), a psychiatrist who believes that returning with Patrick to the island to confront and overcome what she assumes is simple post-traumatic stress is the solution. Unknown to them, an oil company has taken over the island and has begun to hunt down the rare komodo dragons, with the intention of covering up their existence and the death toll they have begun to accumulate. Oates (Burke), a biologist for the oil company, is being blackmailed by his boss to eradicate the remaining lizards, along with any problematic witnesses. Patrick returns to his home on the island with his aunt and Victoria and something stirs in the nearby forest, something that has a healthy appetite…
KOMODO was the directorial debut of Oscar-winning special effects man Michael Lantieri, predating the current trend of giant, mega and dino-sized creatures that currently terrorize us on sea, sky and land. Lantieri brought in Phil Tippett, both of whom had won special effects Oscars for JURASSIC PARK, to manage the computer graphics, and the John Cox Creature Workshop, in Australia where the film would be shot, to handle the animatronic lizards. The result is a nearly seamless blend of CGI, puppet heads and tails, and animatronic komodo that enhance the film without calling undue attention to the mix of effects. Filmed in Brisbane on Australia’s Gold Coast, production designer George Liddle built most of the sets on location. It was Lantieri’s film editor, Michael Fallavollita, who suggested his friend, John Debney, for the film’s score. Lantieri had met Debney earlier when he was working on Amblin Studios’ SEAQUEST television series, which Debney had scored. Debney had previously scored 1997’s THE RELIC, a monster film about a primitive reptilian creature roaming the Chicago Natural History Museum, and which serves as a close musical cousin to KOMODO.
John Debney is considered one of the most sought after composers in Hollywood. His unique ability to create memorable work across a variety of genres, as well as his reputation for being remarkably collaborative, have made him the first choice of top level producers and directors. Debney combines his classical training and a strong knowledge of contemporary sounds to easily adapt to any assignment.
In the tradition of classical composers, John Debney enjoys conducting his own work. ''A big part of the joy in what I do is that I consider it an honor to stand in front of live musicians and have the opportunity to hear my music played by these talented people.'' In addition to conducting some of the world's greatest orchestras performing his original works, Debney has also conducted the Royal Scottish National Orchestra on a series of classic film scores for Varese Sarabande Records. He has been celebrated for incorporating a myriad of musical styles and techniques into his work, from contemporary beats to ancient instrumentation.