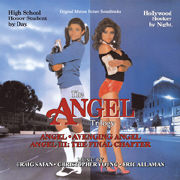 BUYSOUNDTRAX Records will be releasing THE ANGEL TRILOGY, featuring music composed by Craig Safan, Christopher Young and Eric Allaman for the three ANGEL feature films released during the 1980s. THE ANGEL TRILOGY collects the music together on one CD, including the premiere release of Berlin Game’s score for ANGEL III: THE FINAL CHAPTER.

Released in 1984, ANGEL was written and directed by Robert Vincent O’Neill and starred young actress Donna Wilkes (DAYS OF OUR LIVES, JAWS 2, SCHIZOID) as 15 year old Molly Stewart, top of her class in high school who takes to the streets of Hollywood at night, working as a prostitute named Angel. Unbeknownst to her friends or teachers, she’s been abandoned by her parents and is able to keep up the rent on her apartment with her moonlighting while she ducks Social Services and maintains the illusion that her parents are still around. Molly eventually attracts the attention of a serial killer with a compulsion to dismember hookers and the sympathy of detective Lt. Andrews, who is investigating the murders in which Molly has now become both a witness and potential target. With his support, Molly manages to avoid becoming a statistic and finds the courage to emerge from the street life she has assumed was her only option. The premise of the film and the tagline on the poster helped make ANGEL a big hit at the box office and it was inevitable that there would be sequels, which quickly followed over the next nine years.

The soundtrack to ANGEL was composed by Craig Safan, who was then scoring a number of low- to moderately-budgeted thrillers. Safan was given a week to compose the score, as he learned that he was replacing someone else’s score. The theme for ANGEL is performed by a small orchestra favoring flute and strings, enhanced by a soft synth sound that resonates in a kind of glass harmonica fashion. This is the sublime music that represents Molly the schoolgirl. In contrast, the straight-ahead urban groove of Hollywood Boulevard reflects Angel’s outward, street-walker persona that she adopts to make ends meet on her own. These two elements offset each other throughout the score. ANGEL also included a great deal of source music, including the signature song, “Something Sweet”. THE ANGEL TRILOGY includes a new version of this song, arranged and produced by synthesist Dominik Hauser, who carefully transcribed the music to replicate a new recording of the song.
The surprise success of ANGEL prompted a sequel a year later. AVENGING ANGEL was also written and directed by Robert Vincent O’Neill. Actress Betsy Russell stepped into the title role as Molly, with actor Robert F. Lyons briefly assuming the role of Lt. Andrews, who helped Molly get into law school after the events of the first movie. Returning from the first movie was Rory Calhoun as Molly’s friend, washed-up Western actor Kit Carson, and Susan Tyrell as loudmouth landlady Solly, who join her on the streets to catch the bad guys who have killed Andrews. Ossie Davis co-stars as a police Captain heading the official investigation into Andrews’ murder. Composer Craig Safan was involved with scoring THE LAST STARFIGHTER at the time so the producers hired a new composer to score AVENGING ANGEL, Christopher Young. He had barely scored four films when AVENGING ANGEL crossed his path. Young enhanced the second ANGEL movie with an approach similar to Safan’s, contrasting a soft and empathetic theme for Molly with a mix of jazzy trumpets and rocking electric guitars to personify the street that Angel must return to in order to avenge her fallen friend.

With the weak performance of AVENGING ANGEL, a sequel was not immediately forthcoming but was eventually realized with ANGEL III: THE FINAL CHAPTER in 1988. Released straight to video, the film was written and directed by Tom DeSimone. In the film, Molly, now played by actress Mitzi Kapture, is now working as a freelance photographer. She briefly reunites with her long-absent mother and, when mom is killed no long afterwards, Molly must become Angel once again to solve the killing and rescue her half-sister from a slave prostitution ring. To score the film, the electronic duo Berlin Game (Eric Allaman and Reinhard Scheuregger) was hired, whose previous score for Cannon’s 1987 thriller DOWN TWISTED had attracted them to ANGEL III’s producers. Allaman, a classical pianist, had worked with pioneering German electronica band Tangerine Dream on several of their film scores in the early 1980s (including LEGEND), after which he had formed Berlin Game, which was on the way to becoming a kind of alternative electronic combo with a style not unlike Tangerine Dream. Scheuregger, however, was committed to touring Europe with The Motels’ Martha Davis, giving Allaman the bulk of the labor on scoring ANGEL III. The music is a pure electronic score, enhanced with a live saxophone and electric guitar.

BUYSOUNDTRAX Records presents THE ANGEL TRILOGY, with ANGEL and AVENGING ANGEL remastered by James Nelson at Digital Outland, along with music from ANGEL III: THE FINAL CHAPTER, appearing for the first time on compact disc. The booklet includes liner notes by author Randall Larson, including recent insights from the composers on these three scores.

THE ANGEL TRILOGY is a limited edition release of 1200 units.