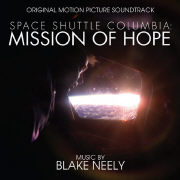 BUYSOUNDTRAX Records is proud to announce the release of SPACE SHUTTLE COLUMBIA: MISSION OF HOPE, featuring music composed by Blake Neely for the 2013 film directed by Daniel Cohen and producers Mark Herzog and Chris Cohen.

SPACE SHUTTLE COLUMBIA: MISSION OF HOPE is the untold story of Colonel Ilan Ramon, a fighter pilot and son of Holocaust survivors who became the first and only astronaut from Israel, embarking on a mission with the most diverse shuttle crew ever to explore space. Ramon realized the significance of “being the first” and his journey of self-discovery turned into a mission to tell the world a powerful story about the resilience of the human spirit. Col. Ramon carried with him a miniature Torah that survived the Holocaust, an artifact representing a cross-generational journey through time and space.

Emmy award nominated composer Blake Neely first worked with producers Mark Herzog and Chris Cohen on Tom Hanks' IMAX film MAGNIFICENT DESOLATION: WALKING ON THE MOON 3-D. Neely has worked with Herzog and Cowen on a range of documentaries including Ted Kennedy and World War II. Simultaneously, Neely has worked with actor and producer Tom Hanks and his company Playtone Productions on projects including STARTER FOR TEN, THE GREAT BUCK HOWARD, and the HBO mini-series THE PACIFIC, for which Neely received an Emmy nomination.

Blake Neely’s score for SPACE SHUTTLE COLUMBIA: MISSION OF HOPE mixes passionate strings, pulsing piano and somber brass to create a sense of reflection and quiet majesty, evoking the hopefulness and profundity of Col. Ramon’s space flight. The score soars with a grace and finesse that brings to mind the dexterity and beauty of space flight. Neely’s score encompasses all aspects of the film, from the spiritual journey the ascent of the Torah represents, to the space shuttle itself.

Blake Neely is an award-winning film and television composer. His recent scoring credits include the CW’s ARROW, USA Network’s POLITICAL ANIMALS, CBS’ THE MENTALIST and CBS’ new series GOLDEN BOY. Among his numerous accolades are multiple film and TV music Awards, a Gold Spirit Award, and three Emmy nominations for the WB’s EVERWOOD, ABC’s PAN AM and the HBO mini-series THE PACIFIC. Neely's composing credits include the television series BROTHERS & SISTERS, NO ORDINARY FAMILY, EASTWICK and ELI STONE. His feature film credits include LIFE AS WE KNOW IT, THE GREAT BUCK HOWARD, THE WEDDING DATE, ELVIS & ANNABELLE, STARTER FOR TEN and FIRST DAUGHTER. He has also composed additional music for films including KING KONG, SOMETHING’S GOTTA GIVE, THE DA VINCI CODE, THE LAST SAMURAI and the PIRATES OF THE CARIBBEAN films. Neely has worked with such masters as Michael Kamen, Hans Zimmer, James Newton Howard, and Vangelis. He has been a featured lecturer on film music technology at the Sundance Institute, University of Southern California, Columbia College and Hollywood Music Workshop Vienna. He has led orchestras around the world, most recently serving as Musical Director and honored guest of the International Film Music Festival in Cordoba, Spain.

SPACE SHUTTLE COLUMBIA: MISSION OF HOPE is a limited edition release of 1000 units.