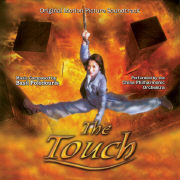 THE TOUCH tells the story of a Chinese family of martial arts acrobats who are, in secret, the guardians of a holy treasure. Their ingrained acrobatic skills (their unique “touch”) allow only them to access the hidden relic. When a ruthless treasure hunter (Roxburgh) kidnaps a member of the family in order to procure the object, the rest of the family, including the eldest daughter’s American ex-boyfriend (Chaplin), pursues him in order to rescue their sibling and recover the treasure.

The film was co-produced by star Michelle Yeoh, who was eager to make a big English language film after starring in Ang Lee’s CROUCHING TIGER, HIDDEN DRAGON, which had been a huge success at the time. She also hired the filmmaking team, including selecting Peter Pau as the director after he had served as cinematographer on CROUCHING TIGER. The international success of CROUCHING TIGER was a key factor in prompting the mainland China government to support Yeoh in producing the country’s first English-language feature film.

Director Peter Pau was looking for a composer to write a large scale orchestral score for the film, along the lines of Jerry Goldsmith or John Williams. Editor Marshall Harvey was an acquaintance of composer Basil Poledouris and after showing him some footage from the climax of the film, the composer became interested in becoming part of the project.

While the director wanted a large symphonic musical score, he also asked the composer to incorporate some ethnic instruments - the er-hu (Chinese two-string violin), pipa (Chinese lute), and xiao (an end-blown Chinese flute) - in order for the score to evoke the fictional legends that lay at the heart of the story. While he was in Hong Kong, Poledouris also wrote and arranged an end title song, “The Touch,” which was recorded by Cantopop diva Kelly Chen (alternately credited as “Kelly Chan”) in Hong Kong’s Moon Studio.

The score for THE TOUCH was recorded in Beijing at Oasis Studios and performed by members of the China Philharmonic Orchestra. Aside from the Chinese soloists, the score was designed for a standard Western symphonic orchestra, enhanced by layered percussion tracks, which were recorded ahead of time in L.A. and to be mixed in later with the orchestral recordings.

Released in the US by Miramax in 2002, THE TOUCH was far from the success that Yeoh and Pau had hoped for but all parties involved agreed that the score was a masterpiece. The music was issued twice on CD in Hong Kong and once on a 5.1 mix on DVD in China over a decade ago and all previous releases became immediately scarce.

BUYSOUNDTRAX Records presents THE TOUCH on compact disc again for its first release in the USA. The music has been remastered for much improved sound, along with bonus tracks not available on the previous CD releases. The booklet includes exclusive new liner notes by author Randall Larson, including new insights from Poledouris colleagues Tim Boyle and Eric Colvin, along with the film’s editor, Marshall Harvey on the creation of this unique score, one of the last scores in Basil Poledouris’ filmography. Limited 2000 copies.