AMERICA: HER PEOPLE, HER STORIES -THE BATTLE OF BUNKER HILL 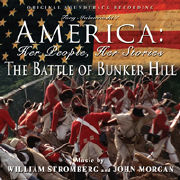 BUYSOUNDTRAX Records presents the original soundtrack to THE BATTLE OF BUNKER HILL, part of the educational film series AMERICA: HER PEOPLE, HER STORIES, produced by Tony Malanowski. AMERICA: HER PEOPLE, HER STORIES is a series of films designed to teach the history of the United States in an informative and positive way. The Values of the Founding Fathers and the perseverance of their Spirit and their Faith are featured in a manner that is designed to instill in the viewer a knowledge of their sacrifice, and an appreciation of our country and our culture. Released in 2009, THE BATTLE OF BUNKER HILL was the first installment of the series.

THE BATTLE OF BUNKER HILL tells the story of of the first military engagement in the American War For Independence, taking place on June 17th, 1775, during the Siege Of Boston early in the American Revolutionary War. The film follows two fathers and two sons as they volunteer to defend the heights overlooking Boston Harbor. The film mixes commentary by select historians with an engaging dramatic story that depicts the events that proceeded and took place during the famous battle. THE BATTLE OF BUNKER HILL was filmed mostly on location at the Howell Living History Farm in New Jersey instead of sound stages and the decision was made early on motion picture film instead of video stock. Careful attention was paid to historical accuracy in costumes and field maneuvers, enhanced by the use of re-enactors who brought their own carefully detailed and maintained costumes and firearms.

When it came time to score THE BATTLE OF BUNKER HILL, producer Tony Malanowsky knew exactly what kind of sound he wanted and who he wanted to hire. Having met years earlier on another project in which he was the editor, Malanowsky went straight to composer William Stromberg. While more popularly known in film music circles for his role, along with fellow composer John Morgan, in reconstructing and recording faithful symphonic representations of classic film scores from Hollywood’s Golden Age, Stromberg and Morgan have also composed a number of notable film scores, both in collaboration and on their own, for several independent motion pictures.

For THE BATTLE OF BUNKER HILL, the composers had found a canvas that would allow them to write the kind of music they love, informed by the influence of Bernard Herrmann and other Golden Age film composers they admired and their producer enthusiastically encouraged them to follow their instincts. The bulk of the score and all of its themes were composed by William Stromberg. John Morgan assisted by composing a number of additional cues. Anna Bonn-Stromberg completed the music team by assisting with additional orchestrations. Despite its documentary elements, Stromberg and Morgan approached the scoring of THE BATTLE OF BUNKER HILL as if it were a feature film.

William Stromberg has composed and conducted music for many films, including the documentary TRINITY AND BEYOND, STARSHIP TROOPERS 2, BUGS and ARMY OF THE DEAD for the Sci-Fi Channel. He has conducted and orchestrated regularly for many Hollywood composers such as Rolfe Kent, Joseph LoDuca, Elia Cmiral, and Marco Beltrami, including the scores for LEGALLY BLONDE, NURSE BETTY, THE TRIANGLE, THE MESSENGERS, and MIMIC. William has also composed and orchestrated music for Steven Spielberg's TINY TOON ADVENTURES and BATMAN: THE ANIMATED SERIES. In the summer of 2001 he toured with the rock group YES for the YES Symphonic Tour across America, composing the overture for the show and conducting the orchestra onstage with the band.

John Morgan is a film composer based in Los Angeles, California. After receiving his Masters Degree in Music at San Diego State University, and studying composition with David Ward-Steinman, he stayed on at the University and taught orchestration, music theory and various film music courses.

In the late 1970s, Morgan moved to the Los Angeles area and secured work orchestrating for such composers as Fred Steiner, Bruce Broughton and Alex North. In 1979, Morgan composed and orchestrated his first feature film score and in the ensuing years composed music for more than 30 feature films, as well as many television, radio and cable projects including STARSHIP TROOPERS 2, TRINITY AND BEYOND, RAY HARRYHAUSEN - THE EARLY YEARS, CINERAMA ADVENTURE, DEMON IN THE BOTTLE, TINY TOON ADVENTURES and others, many in collaboration with his music partner and life long friend, William Stromberg.

Morgan's love and passion for the great scores of Hollywood's golden age has led him to the arena of arranging and reconstructing many classic scores for new recordings. He has embarked on a long series of film music recordings for Marco Polo (Naxos), BMG Classics his own label with Anna Bonn and William Stromberg, TRIBUTE FILM CLASSICS.

Among the scores he has reconstructed and orchestrated for new recordings are: Max Steiner's THE CHARGE OF THE LIGHT BRIGADE, KING KONG; Erich Wolfgang Korngold's CAPTAIN BLOOD, ESCAPE ME NEVER, THE ADVENTURES OF ROBIN HOOD, THE SEA HAWK; Roy Webb's scores for the Val Lewton films, Hans Salter and Frank Skinner's THE WOLF MAN, HOUSE OF FRANKENSTEIN, ABBOTT AND COSTELLO MEET FRANKENSTEIN as well as scores by Hugo Friedhofer and Victor Young.

After earning her Bachelors Degree in Music Composition at the University of Southern California, Anna Bonn Stromberg continued her studies by completing the program of Scoring for Motion Pictures and Television headed by legendary Disney composer, Buddy Baker. At USC, she proudly had the opportunity to study with film composers such as David Raksin, Christopher Young, Fred Karlin, John Parker and Joe Harnell, among others.

After college, Anna went to work for Christopher Young as an assistant and orchestrator. While working with Chris, she orchestrated cues for MURDER AT 1600, HARD RAIN and THE MAN WHO KNEW TOO LITTLE. She then went to work at Warner Brothers to be part of the music team for ANIMANIACS, PINKY AND THE BRAIN and many Warner Bros. films. She became the head proofreader at Warner Bros. and soon after became the head proofreader for Sony Pictures Entertainment. Anna has composed music with her husband, William Stromberg for feature films such as THE INNER CIRCLE, DISMEMBERED, ARMY OF THE DEAD and SASQUATCH HUNTERS for the Sci-Fi Channel. Most recently, working with Eric Stonerook Music, she has been a co-superviser for the music preparation for PUBLIC ENEMIES, FAST AND FURIOUS, DRAGONBALL: EVOLUTION, GRAN TORINO and CHANGELING.