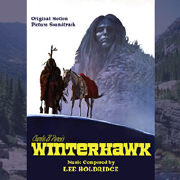 He was the greatest legend the Blackfoot ever had... and the white man could never forget.

WINTERHAWK takes place in 1840 and tells the story of a Blackfoot Indian chief who finds himself and his tribe in danger of extinction from a deadly outbreak of smallpox in what would eventually become Montana. His friend, a white trapper named Elkhorn tells him his only option is to make contact with the nearest white settlement and try to trade for the medicine needed to save his people. At this time, though, the only white people in the area are either mountain men or missionaries. His biggest obstacle is the language barrier and he is soon tricked by some of the local mountain men who promise to take him to a doctor but instead ambush Winterhawk in the forest, killing some of his men and stealing his trade goods. In reprisal, Winterhawk takes a young woman and her brother prisoner and begins the journey back to his village. The leaders of the white settlement, including the father of Winterhawk’s prisoner, form a posse and turn to Elkhorn to help them find Winterhawk and settle their differences. As the posse gets closer to his village, Winterhawk must decide whether he will kill the white men for their treachery or set aside his anger and try to trade with them for the medicine his people need to survive.

Lee Holdridge was born in Port-au-Prince, Haiti in 1944. He spent his early years in Costa Rica, beginning music studies on the violin at the age of ten with Hugo Mariani, then the conductor of the National Symphony Orchestra of Costa Rica. Later, Holdridge moved to New York to continue his music studies and begin his professional career as a composer. Holdridge’s successes in New York came to the attention of Neil Diamond who brought Holdridge to Los Angeles to write arrangements for his forthcoming albums. A string of Gold and Platinum hits followed, which led to Diamond and Holdridge collaborating on the film score for Jonathan Livingston Seagull. Since that time, Holdridge has scored numerous film such as Splash, Big Business, Mr. Mom, Micki & Maude, 16 Days Of Glory, The Beastmaster, Sylvester, A Tigers’ Tale, El Pueblo Del Sol, Old Gringo and Pastime. His television work includes Moonlighting, Beauty and the Beast, the complete eight hour remake of East of Eden, The Tenth Man, Dreamer of Oz, Hallmark Hall Of Fame’s One Against the Wind and The Story Lady. Lee also began a very successful collaboration with Moriah Films, the film division of the Simon Wiesenthal Center, with the Academy Award winning documentary feature film The Long Way Home. In addition to his film career, Mr. Holdridge has had an extensive repertoire of concert works performed and recorded. He has also worked with many major recording artists having written, arranged and conducted for Placido Domingo, Barbra Streisand, Brian May of Queen, Stevie Wonder, Neil Diamond, John Denver, Neil Sedaka, Daniel Rodriguez, Al Jarreau, Dionne Warwick, Diana Ross, Natalie Cole, Jane Oliver and many others.

BSX Records presents the world premiere release of WINTERHAWK, containing the score composed by Lee Holdridge and additional music composed for the film by William Goldstein and Nicolas Flagello. The score for WINTERHAWK is presented in its entirety, with alternate takes and bonus tracks, along with liner notes written by Randall Larson. For reasons that are not clear, the Good Times Home Video release of WINTERHAWK carries a replacement score composed electronically by Kendall Schmidt. His music is not included on this release.

WINTERHAWK is a limited edition release of 1000 units.