WHALE FOR THE KILLING, A/ WIND 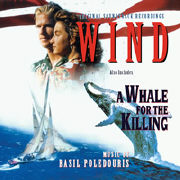 A WHALE FOR THE KILLING tells the story of Charles Landon (Peter Strauss), an ecologist from New York who finds himself stranded in a small village in Newfoundland with his family after a storm has blown them off course. When a humpback whale is discovered stranded by the same storm in the town’s lagoon, Charles sets out to save the whale’s life from some of the local townspeople, who have their own plans for the whale.

BSX Records presents A WHALE FOR THE KILLING for the first time on compact disc from the composer’s own elements. At the time of the project, the composer had prepared a release for demonstration purposes and a possible album release. These elements have been remastered by James Nelson of Digital Outland. Previously released twice on compact disc and considered a rarity, WIND has been newly mastered and the original album sequencing has been restored, minus the song contained on the original soundtrack release. Both films appealed to the composer’s love of the sea and sailing and this is reflected in the music he composed for these projects. This is a limited edition release of 1500 units.