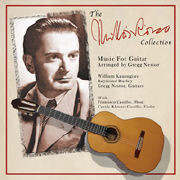 THE MIKLOS ROZSA COLLECTION: MUSIC FOR GUITAR presents the music of Miklos Rozsa in an entirely new light, adapting the pieces for two guitars, in arrangements based faithfully on the composer’s original scores by internationally acclaimed guitarist Gregg Nestor. THE MIKLOS ROZSA COLLECTION: MUSIC FOR GUITAR contains selections from EL CID, THAT HAMILTON WOMAN, YOUNG BESS, MADAME BOVARY, A WOMAN’S VENGEANCE, PROVIDENCE, BLOOD ON THE SUN, GREEN FIRE, MOONFLEET, TIP ON A DEAD JOCKEY, LYDIA and CRISIS. In addition to selections from Rozsa’s large filmography, this release contains two classical works, Kaleidoscope, Op. 19c, composed for his children in 1946 and his Sonata For Guitar, Op. 42, composed in 1986.

Born in Budapest, Hungary in 1907, composer Miklos Rozsa studied the violin from the age of 5. While living in London in 1935, Rozsa was hired by legendary producer Alexander Korda to score his film, KNIGHT WITHOUT ARMOR. Later, while composing the music for another Korda production, THE THIEF OF BAGDAD, Rozsa moved to California, where he remained for the rest of his life. Throughout his film career, he worked in many genres but distinguished himself writing music for the film noirs of the 1940’s and the great costume epics of the 1950’s and 1960’s. A classically trained composer, Rozsa was well known for his dedication to researching the musical history of the time periods of the films he worked on. His filmography includes music composed for films such as THE THIEF OF BAGDAD, THE JUNGLE BOOK, DOUBLE INDEMNITY, SPELLBOUND, THE LOST WEEKEND, QUO VADIS, IVANHOE, JULIUS CAESAR, KNIGHTS OF THE ROUND TABLE, BEN-HUR, KING OF KINGS, EL CID, THE PRIVATE LIFE OF SHERLOCK HOLMES, THE GOLDEN VOYAGE OF SINBAD and TIME AFTER TIME, among others.

Gregg Nestor has built a strong following for his abilities as soloist, accompanist and arranger. He has recorded and broadcast in Holland, Belgium, Spain and for the BBC in London. Many works arranged by Gregg for solo/duo guitars or with various ensembles have been published.

For THE MIKLOS ROZSA COLLECTION: MUSIC FOR GUITAR, Gregg was allowed access to the composer’s personal archives. The results are arrangements as concise and accurate as possible to the composer’s original intentions.

William Kanengiser is known worldwide for his talents as a soloist and chamber musician. Also known for his expertise as an arranger, William has transcribed extensively for the Los Angeles Guitar Quartet.