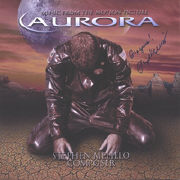 As a teen shooting super 8 films, there were several things I often dreamed. One was to make films that many people would see and enjoy. The other was to have Stephen Melillo, my friend, compose the scores.

I met Stephen in 1979. Over the years and with many miles between us, we kept in touch, growing in our own artistic ways and hoping that one day we would have the opportunity to work together. That dream came true with “Aurora.”

Filmmaking, by it’s nature, creates many opportunities for artists of all kinds to combine their talents and create experiences far beyond the viewers ability to ever encounter. One of the strongest and most manipulative forces at work in the filmmaking process is the composer. The composer can direct one’s emotional response so effectively, that whatever one accomplishes as an actor, cinematographer or director, is radically enhanced or destroyed by the power of the music score.

Having the opportunity to watch Stephen compose and mix over a course of a few days was truly awe inspiring. I can’t think of anything more exhilarating than listening to music that not only captures what one tries to accomplish as a filmmaker, but actually defines it. Stephen Melillo’s score for “Aurora” is all that I had hoped and prayed for. It is melodic, grand, wondrous, at times oppressive, mysterious, driving and yet tender, hopeful and extremely passionate.

I thank God for allowing me to share my gifts with so many people and for introducing me to such a vast group of incredible artists and technicians who have shared their gifts with me. Thank you, Stephen, for your music, your support and for believing in my work.

I look forward to many more collaborations in the years to come.

Now in 28 countries, the Music of 21st Century Composer, Stephen Melillo has been played and recorded by some of the World's finest ensembles and conductors. More than 950 works span from the IBM ThinkpadR Demo to the Concerto for Violin & Orchestra. Currently 112 commissions for Wind & Percussion Ensembles of the 3rd Millennium comprise the body of recorded work called STORMWORKS.

In 1992, Mr. Melillo's innovation in self-publishing and digital music dissemination, also known as STORMWORKS, established a modern precedent in international Music publishing. From this seminal beginning STORMWORKS is now represented online and via store dealerships in the United States and throughout Europe and the Orient: stormworld.com

You will find Mr. Melillo's scoring work in 13 feature films , 28 network television programs and the 1991 Academy Award-nominated movie 12:01PM starring Kurtwood Smith. In the early 1990’s Stephen composed game music for Nintendo, Sega-Genesis and others through his affiliation with Absolute Entertainment. His work in this field, presented at the 1993 NAMM convention positioned him as a pioneer for a complete new generation of “film-scoring” approaches to game-music.

During the scoring of 12:01PM, and once again inspired by his drive to inspire students, Mr. Melillo authored and implemented Music To Picture, a hands-on curriculum establishing, in 1991, the film-scoring program at the State University of New York at Purchase.

The 1992 premiere of Stephen Melillo's S-MATRIX Symphony Numberless, conducted by Maestro Gerhardt Zimmerman with the North Carolina Symphony Orchestra, received the first standing ovation in the 40-year History of the Meymandi Concert Hall in Raleigh. During intermission, a delighted Maestro Zimmerman commissioned Stephen's; Symphony 2: At Life's Edge, which premiered in 1996. At present, Maestro Zimmerman and the Canton Symphony Orchestra are engaged in planning a CD of Melillo symphonic works that will include his Concerto for Violin, composed for virtuoso violinist, Anne Akiko Meyers.

Since 1995, ASCAP continues each year to recognize Mr. Melillo's work with Special Awards in Concert Music. In 2005, his “Documentary in Music, ” KAKEHASHI: THAT WE MIGHT LIVE was nominated for the prestigious PULITZER PRIZE IN MUSIC. This composition marking 60 years since the end of WW II, involved an unprecedented gesture in music-making and made International History. KAKEHASHI, inspired by and dedicated to the Survivors of the Bataan Death March, was recorded by an ensemble of 2 American Choruses and 143 Japanese Military Musicians specially appointed for this historic occasion by the Japanese Ministry of Defense.

His scoring techniques, orchestration, recording practices and implementation of new sonic forces in the modern Wind Ensemble have been the subject of several Doctoral dissertations in America, Europe and the Orient. Many of the World's finest ensembles and conductors continue to employ his innovative strategies and instrumentation.

Many of Stephen’s students now enjoy musical careers as teachers and professionals in an eclectic range, employed as teachers, recording artists, television and studio musicians and members of major symphony orchestras.

With 17 years in the public schools, more than 30 years as an international guest conductor, and more than 35 years as a practitioner of the Chinese martial art, Mr. Melillo's ability to communicate musically comes from an extensive knowledge base. From beginning instrumental students to Musicians employed by the Rotterdam and Vienna Philharmonic Orchestras, Mr. Melillo has worked with a vast array of multinational students aged 4-87. Such diverse experience includes teaching Braille-reading music students at Perkins School for the Blind in Massachusetts to teaching close-quarter defense techniques to an 11-man detachment of Green Berets stationed in Mansfield, Connecticut during the late 1970s.

Stephen studied conducting with Jens Nygaard and Atilio Poto, a student of Arturo Toscanini. Varied educators, conductors and commissioning parties have termed Stephen Melillo's work “a new voice in the direction of music.”

In addition to film work with New York and Los Angeles based studio orchestras, 112 live concert premieres include:

STORMWORKS Chapter 1: Without Warning, rendered by combined Musicians from the US Army, Navy and Air Force, Stephen Melillo conducting.

STORMWORKS Chapter 3: WAIT of the WORLD, rendered by The Marine Band of the Royal Netherlands Navy in Amsterdam's Concertgebouw, Maurice Hamers conducting.

STORMWORKS Chapters 5 & 8: WRITINGS on the WALL, rendered by 143 Musicians of the Japanese Military and The Central Band of Japan Self Defense Force with choruses from Shenandoah & Old Dominion Universities in Tokyo, Japan, Stephen Melillo conducting.

The Concerto for Violin, rendered by The Sudwind Orchester from Germany, Stephen Melillo conducting.

Stephen Melillo's 1976 composition, After the Storm, was played to a television audience of over 2 million as the concluding work in Singapore's 2005 salute to “Building a New Future.”

In addition to numerous guest conducting assignments around the world, Stephen has also made Music with the following US All-State Bands: Alabama, Arkansas, Kentucky, Louisiana, North Dakota (2x), New Mexico (2x), and New York in 2006.

Mr. Melillo attended the University of Connecticut at Storrs in 1976, the Manhattan School of Music in New York in 1979, and holds a Bachelor of Music Education from the Boston Conservatory of Music, Massachusetts in 1980 and a Masters in Music and Conducting from Columbia University, New York in 1982.