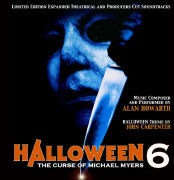 Personally autographed by Alan Howarth. The only thing more terrifying than how it began, is how it will end.

Released in 1995, HALLOWEEN: THE CURSE OF MICHAEL MYERS reveals that Michael Myers is driven by an ancient druidic curse that grants him immortality while compelling him to kill his family as he continues to stalk his niece, Jamie, and her newborn son. HALLOWEEN II revealed that Laurie Strode was Michael’s sister, put up for adoption after Michael’s rampage in the first film, while Jamie was identified as Michael’s niece in HALLOWEEN 4. In addition, HALLOWEEN: THE CURSE OF MICHAEL MYERS was another game changer in the franchise, bridging the original film series inaugurated by John Carpenter in 1980 and the new style of HALLOWEEN films that would begin with HALLOWEEN H20 in 1998. At the time filming began, the franchise was owned by producer Moustapha Akkad and Trancus International Films. During filming, a deal was struck to sell the property to Miramax, for its production company, Dimension Films. The advantage in doing this was that Miramax could give the series a release on a national scale again.

The score for HALLOWEEN: THE CURSE OF MICHAEL MYERS was performed by Alan Howarth, who had assisted John Carpenter on HALLOWEEN II and HALLOWEEN III and returning again after scoring HALLOWEEN 4: THE RETURN OF MICHAEL MYERS and HALLOWEEN 5. The transition from one production company to another had a significant impact on the film, specifically in post production as Dimension wanted something with a lot more action and a lot more gore, which forced screenwriter Daniel Ferrands to write some new material for the film and causing the existing version of the film to go through extensive re-cutting along with the addition of new footage. Because of the re-tooling of the film, composer Alan Howarth had to completely re-do his musical score to fit the re-cut picture and give it the amped-up energy the new franchise owners wanted. The original version of the film, directed by Joe Chappelle and dubbed the Producer’s Cut contained a more traditional HALLOWEEN score, going back to the original approach used in the first film, with some subtle changes made possible by new technological advances in the gear Howarth was using to compose the score. For the Theatrical Version of the film, Howarth returned to the score he had already composed and added drums and guitars, a lot more beats, and more strange, synthetic tones. Howarth was able to salvage some of what he had written for the Producer’s Cut but cues had to be rearranged to fit the new length of recuts and to match the newly-filmed footage. In addition to what Howarth was doing for the Theatrical Version, a composer and music editor named Paul Rabjohns was brought in by director Joe Chappelle to add some additional musical material in the rush to finish the final cut, but his music and Howarth’s was never integrated together.

Alan Howarth, in addition to being a composer, is an accomplished sound designer and editor, having worked on films such as STAR TREK: THE MOTION PICTURE, POLTERGEIST, TOTAL RECALL, ARMY OF DARKNESS, BRAM STOKER’S DRACULA, STARGATE and many others. He has been a frequent music collaborator with John Carpenter on his films beginning with ESCAPE FROM NEW YORK in 1980 and including HALLOWEEN II & III, CHRISTINE, BIG TROUBLE IN LITTLE CHINA, THEY LIVE and PRINCE OF DARKNESS and Alan has scored many films on his own, including THE LOST EMPIRE, RETRIBUTION, HALLOWEEN 4 & 5, THE DENTIST, HEADLESS, BOO!, EVILUTION,BASEMENT JACK, BRUTAL and HOUSE AT THE END OF THE DRIVE.

For this new expanded release of HALLOWEEN: THE CURSE OF MICHAEL MYERS, the music is presented on 2 CDs. Alan Howarth’s original unreleased score (the Producer’s Cut) can be found on Disc 1 of this new release while the music as it was heard in the final film is provided with an extended presence on Disc 2. The music has been newly remastered and contains previously unreleased music. The booklet includes exclusive in-depth liner notes written by author Randall Larson, with the participation of the composer.
This is a limited edition.

This item has a planned release date of September 15th. Pre-orders now being accepted!