HALLOWEEN 5: THE REVENGE OF MICHAEL MYERS 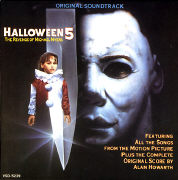 HALLOWEEN 5 takes place approximately one year after the events of HALLOWEEN 4. Jamie Lloyd (Harris) has been remanded to Haddonfield’s Children’s Hospital after attacking her stepmother a year before. She is being treated by Dr. Loomis (Pleasance) and cared for her by her stepsister Rachel (Cornell) and her friend, Tina. The unstoppable Michael has spent the year in a coma, recovering from his wounds and awakens to search for Jamie again. Jamie, who hasn’t spoken since the attack on her stepmother, discovers that she has developed a telepathic link to her demonic uncle and becomes aware that he has awoken. Learning about Jamie’s link to Michael, Dr. Loomis plans to use her talent to his advantage, to finish Michael once and for all.

The score for 5 HALLOWEEN 5: THE REVENGE OF MICHAEL MYERS was performed by Alan Howarth, who had assisted John Carpenter on HALLOWEEN II and HALLOWEEN III and returning again after scoring HALLOWEEN 4: THE RETURN OF MICHAEL MYERS. With the fifth film, director Dominique Othenin-Girard wanted to return to the musical style of the first film, which included more writing for piano. Using the Synclavier, then considered state-of-the-art technology in 1989, Howarth was able to accommodate the director’s request and also employed the Kurzweil 250 electronic sampler, a pair of Linn drum machines and several new banks of emulators, equipment which had already been used successfully on the score for THEY LIVE.

For this new expanded release of HALLOWEEN 5: THE REVENGE OF MICHAEL MYERS, the composer returned to the original multi-track masters and transferred them directly into Pro Tools, allowing him to create all new digital mixes. The music has been newly remastered and contains previously unreleased music. Also included is the original album presentation, newly remastered. The booklet includes exclusive in-depth liner notes written by author Randall Larson, with the participation of the composer.