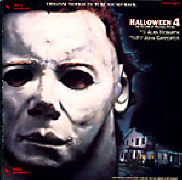 HALLOWEEN 4 marked the return of Michael Myers as the central villain of the franchise. HALLOWEEN 4 tells the story of Michael Myers, who after having escaped from the Ridgemont mental facility after being in a coma for ten years, returns to Haddonfield once more. Dr. Samuel Loomis, who has also survived the fiery explosion at the end of HALLOWEEN II, goes looking for Michael with Sheriff Meeker. During the course of their search for Michael, they learn that Laurie Strode, now deceased, had given birth to a daughter, Jamie. Now living with a new family, she is Michael's only living relative and becomes the focus of his rage. As Michael stalks the streets of Haddonfield again, can Dr. Loomis find him before he can get to Jamie?

The score for HALLOWEEN 4: THE RETURN OF MICHAEL MYERS was performed by Alan Howarth, who had assisted John Carpenter on HALLOWEEN II and HALLOWEEN III. Howarth created a new score that referenced the original HALLOWEEN but with a synthesizer twist. Howarth also included new tracks such as “Jamie's Nightmare”, “Return of the Shape”, and “Police Station.”

Alan Howarth, in addition to being a composer, is an accomplished sound designer and editor, having worked on films such as STAR TREK: THE MOTION PICTURE, POLTERGEIST, TOTAL RECALL, ARMY OF DARKNESS, BRAM STOKER'S DRACULA, STARGATE and many others. He has been a frequent music collaborator with John Carpenter on his films beginning with ESCAPE FROM NEW YORK in 1980 and including HALLOWEEN II & III, CHRISTINE, BIG TROUBLE IN LITTLE CHINA, THEY LIVE and PRINCE OF DARKNESS and Alan has scored many films on his own, including THE LOST EMPIRE, RETRIBUTION, HALLOWEEN 4 & 5, THE DENTIST, HEADLESS, BOO! And, most recently, EVILUTION and BASEMENT JACK.

For this special Limited Edition Expanded release of HALLOWEEN 4: THE RETURN OF MICHAEL MYERS, the music has been newly remastered and includes previously unreleased music. Four all new bonus tracks are included, bringing the running time of the album to over 53 minutes of music. Includes exclusive liner notes and HALLOWEEN 4 images available nowhere else.

IN STOCK after mid October. Pre-orders now being accepted!