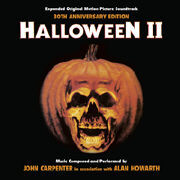 Personally autographed by Alan Howarth on cover and disc!
More Of The Night HE Came Home…

HALLOWEEN II is a direct sequel to the first film, set on the same night of October 31, 1978 in the fictional Midwest town of Haddonfield, as the seemingly indestructible Michael Myers follows his intended victim Laurie Strode (Jamie Lee Curtis) to a nearby hospital. Produced on a shoestring budget and released in 1978, the original HALLOWEEN earned over 47 million dollars at the box office, making it one of the most successful independent films for many years. With this tremendous success, it would only be a matter of time until there was a sequel. While the first film was produced independently of any major studios, the sequel was produced by Universal, with full creative control in the hands of John Carpenter and Debra Hill.

The film's score is a variation of John Carpenter’s compositions for the first HALLOWEEN, particularly the main theme's familiar piano melody played in a 5/4 time rhythm. This time, the score was performed on synthesizer organs rather than on piano. For this special 30th Anniversary Edition of HALLOWEEN II, the original 1981 album presentation is included, newly remastered. In addition, a special suite of seven tracks has been prepared, consisting of the entire film score sequenced in chronological order and including previously unreleased music. In addition, Alan Howarth has contributed exclusive notes for the booklet.

This is a limited edition release of 1000 units.