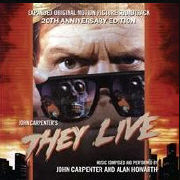 Personally autographed by Alan Howarth. You see them on the street. You watch them on TV. You might even vote for one this fall. You think they're people just like you. You're wrong. Dead wrong.

Twenty years later, THEY LIVE continues to engage old fans of the film and gather up new fans with its potent combination of science fiction, action along with biting political and social commentary. THEY LIVE tells the story of John Nada, a down-on-his-luck construction worker, who comes to Los Angeles in 1988 looking for work. What he finds instead is the ultimate conspiracy as he puts on a special pair of sunglasses and begins to see the world as it really is. Aliens have infiltrated every level of our society and are controlling us with subliminal messages while they quietly rob us of our world’s precious resources. Taken lightly at the time of its release, THEY LIVE seems to have become more apocryphal as the years go by, especially in light of the world’s current political climate.

Alan Howarth, in addition to being a composer, is an accomplished sound designer and editor, having worked on films such as STAR TREK: THE MOTION PICTURE, POLTERGEIST, TOTAL RECALL, ARMY OF DARKNESS, BRAM STOKER’S DRACULA, STARGATE and many others. He has been a frequent music collaborator with John Carpenter on his films beginning with ESCAPE FROM NEW YORK in 1980 and including HALLOWEEN II, CHRISTINE, BIG TROUBLE IN LITTLE CHINA and PRINCE OF DARKNESS and Alan has scored many films on his own, including THE LOST EMPIRE, RETRIBUTION, HALLOWEEN 4 & 5, THE DENTIST and, most recently, HEADLESS and BOO!, for the SCI-FI Channel.

THEY LIVE was released on compact disc at the time of the film’s release by Enigma Records and contained around thirty minutes of music. To this day, despite having been out of print for several years, THEY LIVE continues to fetch high prices in the collector’s market. AHI Records presents a new 20th Anniversary Collector’s Edition release of THEY LIVE, which includes the contents of the original album release, newly remastered, along with sixteen tracks of previously unreleased music as bonus tracks, nearly 75 minutes of music. The booklet contains notes written by the composer himself. This is a limited edition release of 1000 units.