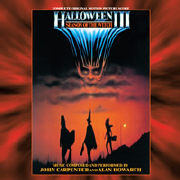 OUT OF PRINT CD. It’s almost time, kids…
The clock is ticking.

After the enormous and unparalled box office success of the first two HALLOWEEN films, the producers chose to take the franchise in a new direction, by telling new stories that would have nothing to do with Michael Meyers but would be linked together by a common thread. The events of the stories would take place during Halloween. For the second sequel in the HALLOWEEN franchise, they chose to tell the story of Silver Shamrock, a company known for its unique Halloween masks, run by the mysterious Conal Cochran (Dan O’Herlihy, THE LAST STARFIGHTER), and his insidious Manchurian-like plan to kill millions of innocent people around the world using a combination of their special masks and a specific radio signal broadcast at a particular time, to turn children into unstoppable assassins. Standing in the way is Doctor Daniel Challis (Tom Atkins, THE FOG, NIGHT OF THE CREEPS), a psychiatrist who accidentally stumbles onto the plot. Considered a creative mis-step in the evolution of the HALLOWEEN series, the film has developed a following over the years and at least one creative decision paid off in the long run. The musical duties for HALLOWEEN III: SEASON OF THE WITCH were handled by series creator John Carpenter and Alan Howarth.

Alan Howarth, in addition to being a composer, is an accomplished sound designer and editor, having worked on films such as STAR TREK: THE MOTION PICTURE, POLTERGEIST, TOTAL RECALL, ARMY OF DARKNESS, BRAM STOKER’S DRACULA, STARGATE and many others. He has been a frequent music collaborator with John Carpenter on his films beginning with ESCAPE FROM NEW YORK in 1980 and including HALLOWEEN II, CHRISTINE, BIG TROUBLE IN LITTLE CHINA, PRINCE OF DARKNESS and THEY LIVE and Alan has scored many films on his own, including THE LOST EMPIRE, RETRIBUTION, HALLOWEEN 4 & 5, THE DENTIST and, most recently, HEADLESS and BOO!, for the SCI-FI Channel.

The original album for HALLOWEEN III was released by Varese Sarabande Records and, to this day, despite having been out of print for several years, fetches high prices in the collector’s market. AHI Records presents a new 25th Anniversary Collector’s Edition release of HALLOWEEN III: SEASON OF THE WITCH, which includes the contents of the original album release, newly remastered, along with thirteen tracks of previously unreleased music as bonus tracks, nearly an hour of music. The booklet contains notes written by the composer himself. This is a limited edition release of 1000 units. This release is dedicated to legendary Hollywood film producer Joseph Wolf.
OUT OF PRINT CD