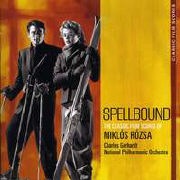 Gerhardt was the first conductor to treat film soundtracks in the same manner as fine concert music. He re-recorded the music with a professional orchestra, thereby encouraging awareness of the many composers writing for the medium. He began to play the piano at the age of five and was already composing and orchestrating his scores at nine. His formal studies were undertaken at the College of William and Mary and the Juilliard School of Music. During World War II, Gerhardt, known to his friends simply as Chuck, was a chaplain's assistant. At the conclusion of the conflict, he enrolled at the universities of Illinois and Southern California. Upon graduation, he was hired by RCA Victor to transfer old recordings by legendary artists such as Enrico Caruso and British pianist Artur Schnabel for issue on the new LP formatted vinyl records. He soon advanced to the mixing and assembly of new recordings by such artists as Sir Adrian Boult, Leopold Stokowski, Massimo Freccia, Alexander Gibson, Ren Leibowitz, Erich Leindsorf, Charles M nch, Fritz Reiner, and James Levine. Gerhardt met and became friends with many of these legendary conductors. Arturo Toscanini, who had created the NBC Symphony for RCA Victor, worked with Gerhardt for several years and encouraged him in the direction of a conducting career. In 1955, Gerhardt left RCA Victor and began production work for the American Westminster Company in London and Vienna. When the company went bankrupt, Gerhardt worked briefly for Bell Sound producing the recordings of several pop music artists like Eddie Fischer. In 1960, Gerhardt returned to RCA Victor and, together with Kenneth Wilkinson, produced a series of classical music albums that featured well-known artists for Reader's Digest. The first series of 12 LPs was entitled The Festival of Light. In 1961, Gerhardt began the work that was to make him legendary when, substituting for a contracted conductor who had to cancel at the last moment, he led the Royal Philharmonic Orchestra with a pencil at a recording session in the Walthamstow Assembly Hall. By 1964, Gerhardt had assembled, together with Sydney Sax, an orchestra they named the National Philharmonic, which brought together many of the finest musicians in London. With this group, Gerhardt created more than 600 albums for Reader's Digest over the next 12 years. In 1968, Gerhardt recorded the first of his albums of film scores, entitled Great Music from the Movies, which included a 17-minute suite arranged by Gerhardt of Korngold's music for the film King's Row. In 1972, because of the success of the film music arrangements, RCA contracted Gerhardt to produce a series of recordings, entitled Classic Film Scores. The first of these was the music for the film Sea Hawk by Erich Wolfgang Korngold. The composer's son, George Korngold, became the producer for the 12-album series, which included music by Alfred Newman, Max Steiner, Franz Waxman, Dimitri Tiomkin, Bernard Herrmann, and John Williams. Gerhardt used the National Philharmonic and prepared suites of the music when the original composer had not done so. Gerhardt would meet with the composers and discuss with them the forms these arrangements should take, to remain faithful to their intentions. Many of Gerhardt's suites continue to be used in concert performances.

THE THIEF OF BAGDAD
2. The Morgan Farm, The New Hired Hand, Swimming Scene
3. Meg Finds The Red House
4. Teller Shoots At Meg
5. Pete's Death and Finale
6. The Love Of The Princess

THE LOST WEEKEND
7. The Bottle, First Meeting
8. The Mouse And The Bat, Nightmare
9. Love Scene and Finale

KNIGHTS OF THE ROUND TABLE
12. Scherzo: Hawks In Flight

THE JUNGLE BOOK
13. Song Of The Jungle