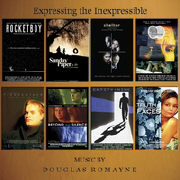 Composer Bio:
The music of composer Douglas Romayne is noted for magical melodies, lush orchestrations, rich textures and sophisticated writing. Filmmakers recommend him due to his collaborative nature, understanding of story, character and visuals and ability to create the most exquisitely nuanced score for their film in a broad range of genres and styles - from small ensembles to world music to large orchestral to folk, pop and rock-based. Among his high-profile credits are the films Big Fat Liar, Stealing Harvard, The Skulls III and I-60: Episodes of the Road and the TV series Buffy the Vampire Slayer, Angel, Duck Dodgers, Miracles and Day Break (as composer and additional music). He is the recipient of the Gold Medal for Outstanding Achievement in Film Music and 5 Gold Medals for Musical Excellence from the Park City Film Music Festival, Best Use of Score Nomination from The Film & TV Music Academy, co-composed the Annie Award winning “Duck Dodgers” honored for Outstanding Achievement in Music in an Animated Television Production and was Associate Music Director to Chris Beck on the Emmy for Outstanding Music Direction-nominated “Once More, With Feeling” Buffy musical.

Beyond scoring, Romayne orchestrates, conducts, arranges, writes new music and mocks up scores. He has produced and written arrangements for pop albums, including three with Jane Wang Beck incorporating traditional Tibetan chants with a mix of pop, rock and world music.

CD Liner Notes:
“After silence that which comes nearest to expressing the inexpressible is music.” - Aldous Huxley

I’ve been privileged early in my career to work with a number of talented, emerging filmmakers. Their films have afforded me the opportunity to work in a wide range of genres, styles and scoring techniques. The music on this album represents the results of these collaborations: from the elegiac Americana of FREEDOMLAND, to the magical and quirky fairy-tale character of ROCKETBOY, to the propulsive action and ominous threat of ENTITY: NINE, to the hushed, enveloping textures of SHELTER.

Ultimately, these varied approaches and styles serve story, be it the life-long lovers in SUNDAY PAPER, a mother and daughter struggling to move beyond tragedy in THE TRUTH ABOUT FACES, an ambitious businessman losing his family in ANTEBODY, or sisters who’ve made a devastating discovery in BEYOND THE SILENCE.

For me, film music works best when it is utilized to express the unseen, the unsaid, the inexpressible. This has been the fun challenge of these films, and if the filmmaker’s comments on my scores are any indication, there’s been some measure of success.

On my website can be found additional thoughts about each of the films presented here and the process the directors and I went through to create the score.