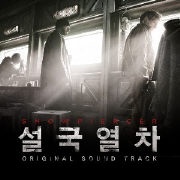 Original Soundtrack from Sci-Fi action Hollywood movie by the Korean director of THE HOST. Music by Marco Beltrami!

I first met with Director Bong at the Beverly Hills Hotel a year before production started. I had seen MOTHER and THE HOST and was a huge fan of his amazing storytelling and unique visual experience, unlike any other director I knew. I had read the script to Snowpiercer and when Bong showed me his visual concepts, I tried hard to contain my excitement. But the wheels started turning immediately. I knew it would be fun to work on a musical concept for the perpetual engine, the frozen world, the struggle of humanity, though I wasn't sure how I would tie the uniqueness of each train car to the overall picture.

The first task was to come up with the ''Wilford song'' that the teacher and kids sing in the classroom. Bong needed it for shooting, so I employed my wife and kids and they gave me strange looks but dutifully sang for me nonetheless.

After that I began adapting some of my thematic ideas to the picture pieces that Bong would send me and would mock them up and send them over to him in Korea. I believe the first cue I sent was the standoff with the axe wielding hooded guards. The idea was to use familiar sounds (piano, strings, brass) and treat them in such a way that they were alienating, perhaps intimidating. With this I also sent a thematic idea for the opening of the picture. I held my breath for a bit, and when Bong responded well to both ideas, I knew I was off and running.

Over the course of the next few months as the picture was being edited, I worked at refining my ideas. We would have Skype calls periodically at my studio in Malibu to review cues and Dooho would translate. One of the major areas to tackle was the whole steam car and dance club scenes. Buck got ahold of all sorts of train and steam sounds to process and used that as an underlying pulse. Again, here in this section, the sound world and music world became blurred.

I usually understood the gist of Bong's comments, but in a couple of places it took me a few runs to get it right. The sushi scene was the hardest. Finally, in desperation I think, Bong told me to look at The Deer Hunter. At last it clicked. Bong's attention to detail and nuance was exacting. He pushed me to think in new ways, which in the end is really what collaboration is all about.

It has been an honor for me to be involved in the process of Bong's genius throughout this project. I hope the score succeeds at providing a cohesive emotional undercurrent, and I am very thankful for having the opportunity to get to know one of my cinematic heroes.

Over the long months we worked together, I’d often catch myself staring at you, whether on Skype through a computer screen, or at your studio in Malibu.

Personally, I…
Liked the face you made when you’d laugh like a shy young girl. Or the opposite, the masculine way you conducted the orchestra, with power and intensity… I like that image, too.

Do you know you possess, in your music as well, such diverse and abundant expressions?

The moment when the heavy gate opens and Curtis encounters the axe soldiers, that terrifying impact of the music, like a hammer ripping into our hearts…

And the lyrical and mellifluous piano that plays over the frozen sea, as the main characters blankly stare out the window in the sushi bar…

Every piece of music came from your mind and heart and the tips of your fingers, you’ve attached a beautiful set of wings to our movie Snowpiercer.
Thank you.
And I want to express the same level of gratitude and respect to Buck and Chris, and the rest of your team in Malibu.

One day soon, I hope to watch the film together - in a theater that has great sound - with our ears wide open.