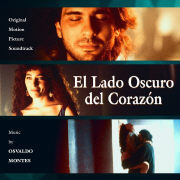 Tactic and strategy for flying

It's more than a quarter of a century ago that The dark side of the heart premiered in the cinema screens, reaching a considerable critical and public success, and becoming the international spearhead for many other important Argentinian films that were to come in the following years. It was an original, innovative proposal, in which director Eliseo Subiela adapted poems from Juan Gelman, Oliverio Girondo and Mario Benedetti (who appeared in a pair of cameos, dressed as a sailor and reciting in German) in a way never seen before in cinema. He made it through some explicit scenes not without a certain controversy as, for example, the “misogynistic bed”, literally swallowing the lovers who didn't satisfy the main character. It was 1992, and the film introduced Dario Grandinetti to the public, but it was also composer Osvaldo Montes' international covering letter. His taking part in the movie, co-produced between Argentina and Canada, where he was living at that time, meant his coming back and the reencounter with his native land after the European and Canadian journey. He came back triumphantly, as the film's popularity and the quality of his work managed to put the soundtrack in the market, although in a fragmentary, isolated way (it was edited thanks to Sony in Argentina, and then thanks to the Milan label in the rest of the world). This is something Rosetta intended to fix editing the interesting La guepe, his first cinematographic incursion. It had already the very personal stamp Montes would imprint in his following works, that dramatic intensity he transmits through instruments such as the saxophone, the piano or the bandoneon. Rosetta published as well That's me, Tita from Buenos Aires, his most recent work.

In this new, special edition, Montes counts with some new mixes made by Olga Santos under his own supervision, in stereo and in a 5.1 format, from digital material he had the great idea of recording on his own AKAI MG 12-14, to then be converted. This has made possible its presentation to a new generation of fans, so that they can now enjoy fully Oliverio's flight, the protagonist and poet. The mix of electronic elements (synthesizers), as the oboe sampler (Jimmy Tanaka), with the soloists, -bandoneon (Walter Rios), guitar (Nicolas Brizuela and Roque Carbajo) and saxophone (Richard Beaudet)-, create a soundtrack that, although a child of its own time with the use of electronic music, seems everlasting after this full revision on the theme sequencing. It also introduces some unpublished pieces, as the atmospheric, hypnotic “Vaca LSD” (LSD cow), where, in a daydream state, Oliverio speaks to her mother, represented by the patient bovine; or “La Bigotuda” (The mustachioed girl), a sort of rock theme dedicated to one of the poet's lovers, who, as the title explains, had some noticeable, sharp facial hair.

The rest of the themes remain as fresh as ever. The suggestive saxophone solo in the initial credits (“Saxo solo”), or the full version of “The dark side of the heart”; the “Milonga de los tres” (Milonga for three), dedicated to the three friends/artists Oliverio, Erik (Andre Melancon) and Gustavo (Jean-Pierre Reguerraz), staunch supporters of the vitality implied in the “carpe diem”. Also the love theme dedicated to Ana (played by the attractive, sensual Sandra Ballesteros), the prostitute reader of poetry for whom Oliverio falls hopelessly in love, the one he eventually manages to “fly” in bed with, and the one whom he gives (quite literally) his heart. There is a duel between the bandoneon and the saxophone in this theme. The accordion stresses the future couple's origins, moving to Montevideo in order to find work, one to prostitute his wits earning a living in an advertising agency, the other her body. The saxophone solo exposes the beautiful love theme heard in the initial credits, supported by synthesizers. Both are shrouded by the “Sefini” bar's peculiar atmosphere, the Montevideo nightspot frequented by Oliverio, where he dwells in his “Soledad” (Solitude) before meeting Ana, to the rhythm of Carbajo's guitar and Esperanza Romero's voice.

They will also be “Contigo aprendi” and “Tu me acostumbraste” the boleros that will mark the rhythm of the second part directed by the same Subiela in 2001, with Ariadna Gil accompanying Grandinetti, to whom the composer dedicates a beautiful song, “Alejandra”, introduced by the piano and then executed with feeling by the guitar. It is not the only surprise hosted by the recording, which presents for the first time more than half a dozen songs belonging to this sequel, since the track that Montes recorded in four voices (interpreted and harmonized by Marta Cabrera in June 2018), and which has been titled “The dark side of the heart” (because it includes its main themes), is a magnificent gift of the author made on purpose for the occasion. An original and stimulating idea that gives full meaning to the director's intentions, although he is no longer present to appreciate it.

There is also the “Tema de Oliverio” (Oliverio's theme), with that peculiar sound distinguishing the main character, always searching for that special woman with whom to unite and be able to “fly” (actually, levitate). In his wanderings, he meets and speaks with Death, played by the versatile Nacha Guevara. In the second part of the movie, filmed almost ten years later, those conversations would include Time as well, played by Kun Balcain. We can also underline the poems recited through that coming and going from Buenos Aires to Montevideo, supported by the synthesizers' hypnotic sound in “Las dos orillas” (The two seashores), with the love theme played on the keyboards and the omnipresent bandoneon. It's the same dynamics in “Poema de Oliverio” (Oliverio's poem), uplifted by an oboe sampler in a fragment not without a certain ceremonial air. Lastly, “El vuelo” (The flight), a piece which singles out that unique moment so sought after by Oliverio, and that only Ana has been able to provide.

Well, Ana… and also Osvaldo Montes. His images are full of poetry, in the lyrics as in the music.

It was in Montreal a cold morning of snow and mate, when I first opened the script El lado oscuro del corazon (The dark side of the heart) by Eliseo Subiela, and on the first page I read: “I don't give a damn that women have breasts like magnolias, or fig raisins… etc.”

Since then, it was a trip without stops until the last page, a great moment, I couldn't believe it, before composing the first note and seeing the first frame I could imagine the whole movie.

Many years later, talking about this matter in an interview, I said that there are scripts you don't need to read, but they are seen and heard, and this one was the first of them. And that's how we started, fax go, fax come, exchanging ideas, until I sent an audio cassette (via fedex) and a few days later I received a fax from Eliseo, that I kept until a few years ago, and almost illegible. In there you could read: “After listening to the music you sent me for El lado oscuro del corazon I want to tell you that, whether it's a co-production or not, I want you to make the music for my movie.”

And that's when they continued to fly like Ana and Oliverio, cassettes with music between Montreal and Buenos Aires.

Today I have the pleasure to share this new edition of the music of a film that gave me the opportunity not only to compose the music of this extraordinary film, but to have met a unique director and a dear friend who will always be Eliseo “Chiche” Subiela. --- from the label