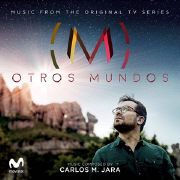 A music from Another World

What have in common the decisive Navas de Tolosa battle, the life of a Spanish Air Forces captain appointed to investigate UFOs in the Canary Islands in the Seventies or Barcelona’s Monserrat Mountain? Since Christmas 2017, the answer to that question is “Another Worlds”. Under that name-and for six consecutive weeks- PPV TV channel 0, belonging to Movistar+, premiered the series Alfonso Cortes-Cavanillas and I directed for the TV screen.

From the first moment, our idea was to approach Mankind’s great mysteries from the perspective of the child Javier Sierra used to be, marveling at those questions from as far back as he could remember.

The series we managed to put together was autobiographical even in its tiniest details. I was, as it could be seen on screen, a precocious child. I started making cut ups from the newspapers my father used to bring home every day, news on “flying saucers”, “lake monsters” or the “Bermudas triangle”. It didn’t take long for me to channel all that curiosity into a children’s radio program where, aged only twelve, I started working every Saturday morning.

It was there, in my Teruel hometown, in a radio station’s window-less room, where I bumped for the first time into a record collection. Stacked on white shelves I thought were infinite rested thousands of LPs and singles-vinyl, of course-waiting for someone to play them on. One of my first tasks was to find and classify the children’s records that were there. The process took longer than planned. As I was going over the shelves, I would bump into ever more remarkable sleeves. The eye of Horus over a green background made me discover The Alan Parson’s Project. A stark planet Earth, from where a colossal human skull appeared, looking at me from its empty eye sockets, led me to listen to Jean-Michel Jarre. Meanwhile, some shelves further down the aisle, Mike Oldfield’s, or Vangelis’ extravagant front covers dragged me to a type of music which forced me to look up. To the stars.

Some more years had still to pass until that music became the soundtrack of my radio nights, evenings where I asked the audience to keep an eye on the skies, in search of any abnormal light crossing through. The fact is that, accompanied by those tunes, I read some of the best books in that stage of my life. The three first volumes of Trojan Horse, by J. J. Benitez; The name of the rose, by Umberto Eco; The Eight by Katherine Neville, all settled themselves in my brain cells as easily as Oxigene, Tales of mystery and imagination or Songs of distant Earth.

What gets imprinted in the human brain through its adolescence never gets erased. That’s why, looking over those years to capture them for “Another Worlds”, the power those vinyl records had emerged strongly from the Eighties’ shadows.

But Alfonso Cortes and I knew from the start that the use of that music wouldn’t be enough.

For “Another Worlds” final editing we needed a soundtrack amalgamating each and every one of the scenes and making sense of the transition from the Navas de Tolosa explanation to the appearance of a painted UFO over Saint Barbara’s cathedral altar, in Cuenca. It wasn’t an easy task. It required not only musical talent, but also an uncommon bravery and some impeccable good taste.

The mission was entrusted to Carlos Martin, who composed a terrific orchestra soundtrack which he directed himself later, guided by the first editing of each chapter. The truth is I remember those days with deep emotion. The waiting time for the chapters’ final sound versions to then adjust the voice-over script and record my final locution became insufferable. I sensed Carlos’ work was going to be something else, but what in no way I could expect was that it would adapt so delicately to the spirit of each part of the series.

The spectator’s reaction-when finally the series premiered in 0 on 20th December 2017-was unanimous. They not only applauded “Another Worlds” concept, but also its music. The messages on social media asking for guidance as to where they could listen to the soundtrack multiplied over the following weeks, making clear what I had already guessed when working on the series: Carlos Martin had nailed it.

Today, the melodies underneath those six initial chapters can brag about a rare achievement. Somehow, they managed to make a place for themselves on the shelves-both mental and digital- occupied in my memory by those great geniuses that blew my mind away in that dark room in Heraldo Radio, when I dreamed I would disclose the great mysteries to the whole world.--- from the label