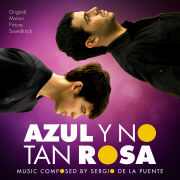 Hands and feet…impossible turns! Hips twisting improbably on the stage. The voices of Gardel, Piazzola, Vitale, the lineage of tango, provoke the body’s writhing, like the sensual companion of a tormented mind, intertwining runaway gazes as they flutter among our fingers; a contradiction that bandoneon, violin and piano play from the power, passion and violence spilling over from this dance; a dance that, like no other, represents love, lust, the union dancers devote to each other; a model for a life which, as the poet said…hurts. This is Blue not so pink’s opening, a 2012 film by Miguel Ferrari which appeared in English as My Straight Son. A tango passing among the protagonists’ lives, which are destined to end up intertwined. Sergio de la Puente’s passion, a Granada-born poet, of noble lineage and quality, gets imprinted over each lived moment. The musician uses them to compose this tango for three; a universal, gender-blind, non-discriminatory dance. Diego, Fabrizio and Armando are the characters the story spins upon, a costumbrist drama delving into the great social (and moral) inequalities homosexuals suffer. Music for diversity and love (passion and desire), a universal principle which finds in the rage that comes with injustice the argumentation to express their belief in something better. This is the way Sergio chooses to compose this delicate plea, uniting Men and Women, Women and Men; faceless beings contorting over the dark outline of a homophobic society unable to understand that Love is somewhat abstract, shapeless, without appearance… Sergio builds his apology (for everyone) on the consequences some acts have on the stark lives of the protagonists, chapters that piano, violin and accordion illuminate with a different tempo, new and touching, representing the lovers’ unconditional feelings. This love pours from the wounds created by tragedy, and those wounds heal through the luminous music Sergio devotes to Diego and Armando’s relationship, father and son beginning a new bond, a new way of loving. As the gaucho said: That’s it, the tango is over…

Sergio de la Puente’s music is as universal as love; faceless, gender-blind…The delicate, sometimes joyful melodies weave love and desire over the lack of understanding of a world which has stopped believing in Universal Love, a feeling that would lead to hope for a better future. My Straight Son’s music opens the door to that belief, the love men and women, women and men, profess each other on the world’s stage, a film set where anonymous glances flutter as we all dance cheek to cheek. --- from the label