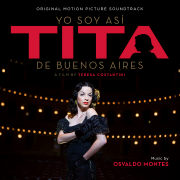 THAT’S ME, TITA FROM BUENOS AIRES

Chance has made it possible for record label Rosetta to edit almost in unison Osvaldo Montes’s first film score, La Guepe (The Wasp), a mid-Eighties Canadian production, which, as happens with most of this great Argentinian composer’s music, sounds still as fresh and dynamic as if it was composed yesterday, and this 2017 film directed by Teresa Costantini, Montes’s last one to date, devoted to legendary singer and actress Tita Merello. This biopic is played by Mercedes Funes, who can also sing with astonishing faithfulness, and Damian de Santo as Luis Sandrini, Tita’s true love and partner during the Forties. The film pays homage to one of Argentina’s most popular song and cinema personalities, Laura Ana Merello, who, as many other myths, had a very humble origin. She was born at the beginning of the century, in 1904, and she became an orphan very early, having to survive in the outskirts of the city as a chorus girl under the zealous protection of the first pimp at hand. She could never attend the school, so the actress-to-be entered her adulthood, in the Twenties, being completely illiterate. Bit by bit, however, she started making a name for herself in music, until she made her cinema debut alongside Libertad Lamarque in Argentina’s 1933 first sound film, the aptly titled Tango!

Many of her emblematic songs date from those times, as Se dice de mi (They say about me), Pipistrela (Pipistrela), La muchachada del centro (Uptown Youth), Ahora te llaman Lou Lou (Now they call you Lou Lou), Yo soy asi pa’l amor (I’m like this for love) and Mi papito (My daddy), composed by the greatest tango masters (Discepolo, Canaro). All of them are present in this album, re-recorded with Montes’ musical arrangements and Funes’ astonishing interpretation. Tita’s biopic focuses on her career as a singer, although it also passes through the Fifties, where she starred in well remembered movies as Arrabalera (From the outskirts, 1950), Los isleros (Islanders, 1951), Guacho (Orphan, 1954) (the last two brought her two Best Actress Awards from the Argentinian Cinematographic Critics Association, the country’s greatest cinematographic prize), or Mercado de abastos (Supplies Market, 1955), where she sang for the first time her emblematic They say about me in a movie. She also appeared in very successful and popular productions as Filomena Marturano (1950), based on Italian author Eduardo de Filippo’s work, which made critics compare her to great, fiery international actresses such as Ana Magnani or Bette Davis. The film became the trigger for her sentimental break up with Sandrini, who didn’t want to stay by her side during filming and left for Spain in search of greater fortune. It was one of those lives worth telling on screen, something that Costantini, the project’s scriptwriter, director and maker, understood. She decided not to go further than Tita’s peak of success, probably because she knows the stuff dreams are made of.

Montes approaches his monumental task from three complementary fronts. The first one is devoted to working alongside Mercedes Funes, an actress without musical training who dared to get wholeheartedly under Merello’s skin, including performing her immortal songs. She is, without a doubt, the film’s soul, astonishing in her bravery and freshness, and helped by the composer’s complicity and unwavering dedication. But Montes’ labours go beyond that. His second task was to put into context the movie’s times through a series of narrative themes, composed by himself, where he dares to write foxtrots, tangos, waltzes and any sort of musical element useful to set the stage.

Among these stand out Mua Mua Mua Foxtrot, with Magali Sanchez’s voice, and also Valsecito Vitrola (Gramophone little waltz), Tango 1940, Hot Tango and Eva and Tita’s tango, which can be heard in General Peron’s reception, a moment where the mutual understanding between both women gets set, so different to each other yet both triumphant in a male-dominated environment; in the scene, they become close friends by chatting about their many life sacrifices. This second part includes a revisited version of the classic theme Volver, performed emotionally by Funes and Leonardo Pastore, in their respective roles as Tita and Carlos Gardel. It is a beautiful film climax where Morello sings to an audience formed by all the already gone people who were important in her life. However, Montes doesn’t resist some experimentation, and for the end credits he weaves a version of They say about me, re-titled as Remix, where he uses electronic elements in an original attempt to update a song which was already a reference.

There is still a third front, the score, which Montes does not forget during recording, divided between Buenos Aires and Madrid. It’s worth to mention pieces as Revolution ’55, on piano and bandoneon, or Potpourri Tita (Tita’s Medley), which begins with a beautiful clarinet solo played by Oscar Navarro, director also of the string band Mad4Strings, which performs in the lovely final section where the duet ends supported by a touching string arrangement. The strings are also used in Ni siquiera un hijo (Not even a child), where the heroine evokes her sacrifices in life, especially the fact of not being a mother as the price to pay for a life of success. This is something also addressed from a melancholic point of view through piano and strings in an exquisite, delicate theme, Tita, despierta (Wake up, Tita). The fact that experimented professionals such as Jose Vinader and Olga Santos (in Madrid) took part in the recordings validates the album’s quality seal. Such a multi-faceted, heartfelt music has, as the icing on the cake, its own discographic reflection. A golden touch for Osvaldo Montes’ career, whose work here provides a show of respect for one of his country’s most charismatic performers and, at the same time, reminds us of his unconditional nature as a film composer. A real luxury.--- from the label